I've posted a wrap-up of our teen author event from Monday night with Jamie Bastedo on our bookstore's main blog, HERE. I'm really into reading his previous book On Thin Ice because I really love the cover. I was going to write a premise myself but I li 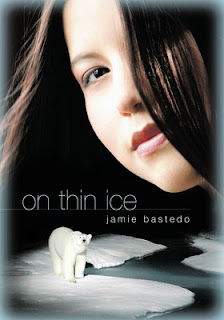 ke how this is worded:

Ashley Anowiak is in search of a murderous polar bear that may be real or mythical. The only thing for certain is that what she discovers will change her life - and her community's - forever.

In spite of its name, no one in the tiny troubled hamlet of Nanurtalik "the place with polar bears" can remember seeing a polar bear in decades. But when a teenager's dismembered body is discovered on a nearby ice road, everyone fears polar bears have returned. The community is thrown into chaos as another suspected bear attack sparks a flury of bullets that whiz through the town during a blinding four-day blizzard. Was it a real or phantom bear? No one can say for sure.

Ashley Anowiak is swept into this storm of confusion by her special link with polar bears expressed through the magic of her art and the terror of her dreams. She finds herself on the trail of Nanurluk, a giant bear that has haunted her people for thousands of years.

It reminds me of Ice by Sarah Beth Durst.
***

I'm reading Vinyl Princess by Yvonne Prinz right now and I am LOVING it! I'm reading it slowly and carefully because I just can't get enough. I'm looking forward to writing a review, very soon hopefully if I can push myself to finish it and grieve for the ending to my reading. I am so pleasantly surprised by the uniqueness of VP. More MORE to come!

Also check this out. I found it on our teen shelves--the first in a series called The Come Up, The World is Mine by Lyah B. LeFlore. Here's what's on the back cover: 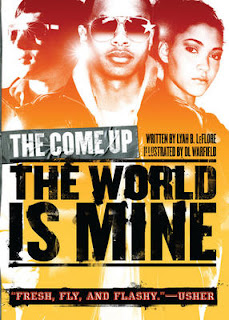 Blue Reynolds has it all: money, brains, style, charisma, and the hunger to be more than what his parents have planned for him. He's a dreamer on a mission to become the world's next music business mogul. But for now he'll settle for being the youngest, hottest party promoter around...and the man on the arm of the fly and sassy Jade Taylor.

Collin Andrews is Blue's best friend, and the order to Blue's madness. Blue dreams up the ideas and Collin figures out how to make them happen; together, they make a powerhouse team that's ready to blow the roof off the music game!

Coming up is never easy. These two dreamers will have to put everything on the line and do whatever it takes to succeed. It's the new American dream, and the sky's the limit. All they need is one shot.

The series is via Simon Pulse and I really love the imprint. And, there are pictures in the book! The illustrator (DL Warfield) has taken photographs of models (also featured on the front and thanked heartfully in the acknowledgements) and worked in a collage of street images, graffiti, edgy splotches and such, in black white and orange. There are images every 5 pages or so.

I'm also kind of obsessed with slang so will probably read this at some point.

Ooo the first one sounds interesting.

Ohh, the first one's cover is pretty! And the premise sounds interesting, like Ice in the way that there are polar bears, but they don't sound like they're portrayed favorably exactly... Enjoy! :)