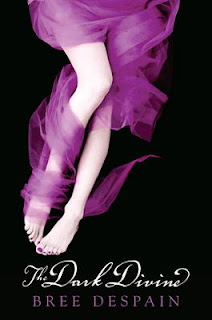 I am going to have a hard time reviewing this book because I absolutely don't want to give out any spoilers. Here, briefly, is how I started reading The Dark Divine:

"ohmigod, look at her toenail polish! I LOVE this cover!"

Obviously I was interested in the content as well. The back cover only gives out a bit of what you're cracking open. Grace Divine, daughter of a Pastor, has strange memories of three years ago when her brother Jude was attacked and their best friend Danile disappeared. When Daniel suddenly shows up in her Art class one day, looking completely changed, she begins to seek out answers. There is also a schism between Daniel and her brother, Jude. So Grace finds herself trapped between the two while trying to find out the truth.

The premise was mysterious enough for me. I was very eager to find out what this was all about. And I had two certain ideas in my mind as I was reading, which both, in their own way, turned out to be the case. I really liked where the story went. Again, sorry to be vague but most of my excitement while I was reading was really not knowing what I would find.

The chapters are broken up with scene changes. So wherever the action is now taking place has a heading; "After Lunch", "Dinner", "Memories", even "A Few Minutes Later". This really worked for me. It gave the action immediacy, an instant context. The author sometimes plays around with this structure and makes it funny. Another funny instance is Grace's description of her art class: "This is art class. We paint pictures while listening to classic rock." I totally had an art class like this in highschool and I loved it. Although the highschool is not the main setting for the story. I felt like we were at Grace's house, and in her yard with the Oak tree most often.

When I started reading, I didn't exactly know where the story was going to go. Grace is entering her art class and this jerk guy is in her spot AND he's messing with her picture of the Oak tree. He's cocky and angsty with Grace, teasing her for being the daughter of a Pastor. Then she realizes that he's Daniel, her best friend who disappeared when they were younger. He was closer to Jude, her brother, but Daniel stayed with their family when he was young and Grace always had a crush on him. Not knowing that he knew her, I was like "who IS this guy? Grace please punch him". When she realizes it's Dan, she wants to know what happened to him and to Jude, five years ago. Jude is tight-lipped and resentful, he storms out when Grace invites Daniel for dinner. Daniel is reluctant when it comes to information, but eventually outs everything. Grace also realizes that her father knows a lot more than she can guess.

You really have to read more than half of the book to get a sense of what's really going on here. I loved how slowly the Reveal happened.

I was a little put off by the character name Grace Divine, daughter of a Pastor? It seemed a little obvious. But in the story Grace informs us that along the way her ancestor's last name used to be Divinovich. But it was changed to reflect the family's religious connection. Other characters' names play a symbolic role as well, for those of you who want to try and figure out what will happen before the end.

The Dark Divine gets a bit sexy along the way too. Daniel plays this cocky character--well actually he was darker than that. He's more sarcastic than cocky. But he's kind of controlling as well. He tells Grace what to do all the time. Or what not to do. And he holds information from her. Then he's a jerk and takes off on her all the time. Anyway, here's a juicy bit:

Daniel leaned toward me until his warm breath lingered on my face again. "You know, some religious scholars believe that when faced with overwhelming temptation"--he reached out and brushed a tangled strand of hair off my neck--"you should commit a small sin, just to relieve the pressure a bit."

In the shadows, his eyes seemed darker than usual, and his stare didn't just make him look hungry--he was starving. His lips were almost close enough to taste.

"That's stupid. And...and...I don't need any pressure relieved." I shoved him away and stepped out of the alcove. "I'm going home."

Their push and pull was fun to read, but I really enjoyed finding out the mystery of what happened in their lives.

And here's a bit of Bree's initial inspiration for the book:

People often ask me where I got the inspiration to write The Dark Divine. Honestly, it's a hard question to answer because it didn't just come from one place, or a dream, or a single idea. It was more like a perfect storm of ideas, thoughts, and memories, over a few weeks time. It all came together while I was riding in the car on a dark January night in 2005. It was shortly after I'd read the book Speak, watched the show Buffy the Vampire Slayer for the first time, listened to the song Such Great Heights over and over again, and was asked to teach a lesson about the concept of grace at my church. I was thinking about all of these things, along with a random memory from the 9th grade, when we stopped at red light and I looked up at billboard in the dark and suddenly this conversation between a brother and a sister popped into my head. The brother was warning his sister to stay away from their former best friend. "He's dangerous. He isn't the person he used to be. You have to promise to stay away from him." And that was when it all started. . . (from Bree's blog)

Okay, it's crazy but at the time I had this quiet passing thought that the art class scenarios and the art teacher reminded me of Speak! Man, I should have written that before so you would believe me. :)

The Dark Divine is coming out in like a week! Pick it up for a holiday read. You'll finish it in a snap.

Oh my! I would LOVE this. Please enter me :)

I would love to read this! Count me in please

I've already read this & fell deeply in love with it, but I'd love a finished copy!

hmm, the religious aspect could either make or break this book for me, though all the reviews I've read so far have been highly positive
either way I'll look forward to reading this!

please enter me! im a follower!

I found her name a little odd at the beginning too.
Please enter me!

Hi :)
Thank you for the opportunity to win THE DARK DIVINE by Bree Despain.
:)
Happy Holidays!
RKCharron
x2 = I Tweeted:
http://twitter.com/RKCharron/status/6709477544

I can't wait to read this book! I've heard such good things and okay.. I LOVE the cover!!

I really want to read this! Thanks for the giveaway. I'd love to be entered.

I was sure this was going to be another "Look! I'm so beautiful and two boys are in love with me!" story, but looks like I shouldn't have been so quick to judge.

I'd love to win a copy if you can post to Aus. Tweeted too: http://twitter.com/rhiannonlhart

Would love to read this one!

I've been waiting for this book for months! Definitely count me in!

Awesome! I'd love to read this book. Count me in!

Please enter me, I desperately want to read this. Thanks for the chance to win it!

Nice review! I won't lie, the nail polish was the first thing that captured my attention too, haha. I seriously cannot wait to get my hands on this book -- I'd love to be entered!

Great reveiw! I want to read that book, so please enter me. If I remember I'll feature your contest on next week's edition of Caught in Print.

That totally sounds like my art class. I miss art so much.

This and Bleeding Violet are my two look-forward-to-reading books this winter! I hope I win! :D

ooh I really want to read this book!

Wow, this books gets better and better with every review!!! I need this book!!!

i've been curious about The Dark Divine when i saw the book cover when i entered the pool for Best Cover on other blog.

please count me in so i will now what the best in this book :)

Great review! And ohhh the teaser! Oh man, I can't wait to read this book! Thanks for the non-spoilery review, I'm trying my best not to read anything that will ruin it :D

I would love, love, love to be entered if this is international! I tweeted - http://bit.ly/7ie1QQ

I'd love to win this :D
my name is Sophie, you can reach me here:
infiniteplaylist AT gmail DOT com

Great review! I would love to be entered in the contest!

Thanks for the review. I would love to be entered to win!

Is this contest international? If so, please enter me!

x2 I posted the link on my sidebar
(the-bibliophiles-lounge.blogspot.com)

Ooh what a great excerpt/quote!

Thanks for the review! :)

Great review! I cant wait for this book! Im soo excited:)Enter me if this is international:)

I *really* want to read this book now! I love the premise of the mystery behind Daniel's disappearance. (I think I spelled that wrong but I don't have spell check on this puter.)

this book sounds great and the cover is beautiful. I can't wait to read it. Thanks for the great review!

I am so excited for this book!!!

Ooh The Dark Divine. I'm so excited for this book!!

I put it in my sidebar under the contest list for x2
http://brizmusblogsbooks.blogspot.com

would love to win it

I'd love to play please! Thanks!

Awesome contest!! This book sounds soo good, and your review was excellent!

x2 I posted this on my sidebar under contests: http://yavampirebooks.blogspot.com/

Please enter me in your giveaway. I need a good book after finals and all the studying.

Great review! I would love to win this book!

Great Review without giving away too much... Sounds great...

Would love to read this.

I would love to be entered.
djeanq(at)gmail(dot)com

Please enter me. Thanks for the chance!

I would love to read this book, please count me in! Great review!

nice review. i would love to read this. it sounds great.

I would love to be entered!

If this is open internationally, please enter me, too :)

I would love to be entered into your fantastic book giveaway.

Thank you for running such a great giveaway.

Good Luck all who enter.xx

Please enter me! Thanks!
Nicole ndz917[at]yahoo[dot]com

Wow, great contest! Thanks so much!

I need this book in Hardcover!

I'm follower eshchory[at]gmail[dot]com and I tweeted

Sounds like a great book. Thanks for the giveaway.
eswright18 at gmail dot com

Tuning Into YA Books said...

I really can't wait to read it!
tuningintoyabooks(at)gmail(dot)com

I just found you on the YA Book Blog Directory.

I follow you, I put this contest in my sidebar, as well as tweeting about it (@missyreadreview).

I have been really excited about this one. Please enter me. I'm a follower.