Book Bundle...Checking Out a Few Titles 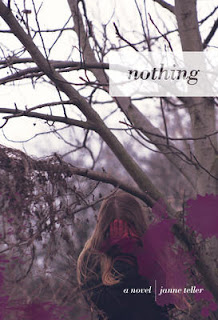 Just a few miscellaneous odds and ends in reading today.

I am coveting a copy of Nothing by Janne Teller, which is out in February. Check out the premise:

"Pierre Anthon left school the day he found out that it was not worth doing anything as nothing mattered anyhow. The rest of us stayed behind. And even though the teachers carefully cleared up after Pierre Anthon in the class room as well as in our heads, a bit of Pierre Anthon remained within us. Perhaps this is why things later happened the way they did ..."

Thus begins the story of Pierre Anthon, a thirteen year old boy, who leaves school to sit in a plum tree and train for becoming part of nothing. "Everything begins just in order to end. The moment you were born you began to die, and that goes for everything else as well." Pierre Anthon shouts and continues: "The whole thing is just one immense play which is about pretending and about being best at exactly that."

Scared at the prospects that Pierre Anthon throws at them together with the ripening plums, his seventh grade class mates set out on a desperate quest for the meaning of life. This involves a closed saw mill, green sandals, a yellow bicycle, a pair of boxing gloves, the Danish flag, the hamster Oscarlille, a Jesus statue stolen from the church, little Ingrid’s crutches, six blue ponytails, a prayer rug, the coffin with Elise’s little brother, the head of the dog Cindarella, fame and a meaning found and lost. (From Janne's website)

It is translated from French and won a bunch of awards in Europe. Simon and Schuster are publishing it in English.
***
And I saw a great set of reviews from Bookshelves of Doom that make me want to read the Scarlett books by Maureen Johnson. Here's a bit of what she says about Suite Scarlett: 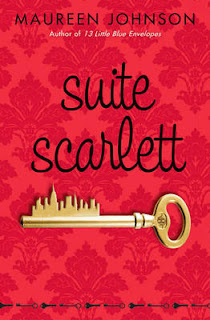 Suite Scarlett is fun times a bazillion. While Scarlett has her doubts about the fun factor of living in a hotel, reading about people living in a hotel very definitely rates high on the scale. (And reading a book by Maureen Johnson about people living in a hotel -- well, that rates even higher!) It made me laugh out loud, I loved Spencer and his talent for slapstick, the characters are hugely likable, it wasn't predictable, and again, it's fun, fun, fun.
So I've ordered a copy and now I sit twiddling my fingers.
But not for too long because my beloved co-worker Dave, who scours remainder websites for teen books for me, has brought in copies of Tempo Change by Barbara Hall. Often he won't tell me what he's seen or ordered and then when things arrive I get to discover them for the first time. Then I dance around him lauding his amazing taste and general coolness. And he nods smugly. It's a routine we've settled into. So Tempo Change (from the pub):
Blanche Kelly's dad is a famous indie rock icon, but not many people at the private school she attends on scholarship know this. Her father left when she was in the first grade, and she can’t quite forgive her mom for not understanding that an artist like her dad needs the time and space to connect to his muse.
When Blanche creates an all-girl rock band, their sound captures a wide audience and the band is invited to compete at the Coachella Music Festival. Blanche feels this could be the perfect time for a reunion with her father. Won’t he be proud to hear her band? Won’t he be happy to get to know his only daughter?
It sounds a little like Beige by Cecil Castellucci! Also, wait for it, I was like "Barbara Hall...Barbara Hall...why so familiar?", then I read her bio and she is the creator of Joan of Arcadia! Hoo Boy! (nothing I actually say in the RealWorld). I LOVE Joan. Maybe mostly for Amber Tamblyn, but also for the quirkiness and general awesomeness of story. Super-psyched.
***
And a little update on my Read The Vampire Diaries Or Not entry.

I really want to thank everyone who left their opinion of the books, the t.v. series, Damon's unearthly brows, and Vamp books in general. All readers should have a group like you for feedback!
I'm gonna give the first book a shot. I'm hearing that there is a big difference between the show and the books, and as I've just become obsessed with the show, I should check it out. I'm on the like 5th episode and I'm in love with Caroline and Damon's relationship. It's hilarious and so wrong. I also like Psychic friend. I find Stefan and Elena a bit of a yawnfest as they were all Drama-rama right away, *12 hours into their knowing of each other* "This feels really right but I can't foresee us being together forever because of things like my brother being a druggie and possibly you having some family issues. Let's just forget about it, although I PINE!!!"

Also, here is a snippet from me talking to another co-worker who patiently hears about EVERYTHING I'm watching on t.v.:
me: "Oh hey, I started watching The Vampire Diaries. Have you seen it?"

co: "Huh, well, overall it's kind of a crap show with average writing...so are you addicted yet?!"
And I am. I am thinking of it all day at work. Those brows....

Mandy
Posted by Words Worth Blogs! at 8:44 AM

Damon's eyebrows make the show SOOOOOO worth it! And his relationship with Caroline is for the win!

"How come you don't sparkle?"

Yes! (about the Vampire Diaries). Seriously, if it was the Elena and Stefan show, I'd soooo stop watching. Enough with the brooding already! Although Elena can be pretty refreshing compared to other paranormal female leads... but only sometimes. Damon + Caroline are hilarious.

I read Suite Scarlett a couple months ago and really loved it :)

Frankie: There was this one awesome part in an episode where Vickie was all "How come you don't have a girlfriend, you're so HOT!" and he's all like *valleygirl* "I KNOW!". I almost died laughing. The borws worked overtime for that one.

Juju: Yeah, me neither. It looks great. And it had such a terrific review it really gets me jazzed!

Donna: Stefan is okay at times. You can tell the writers wanted to make sure he wasn't too broody. Like him dancing was pretty funny.
Although I just had flashbacks to that one ANgel episode were Angel imagines himself busting a move and completely freaks himself out!

Sarah: Thanks for telling me you liked it! I love blogging even to see what I SHOULD be reading! You know?