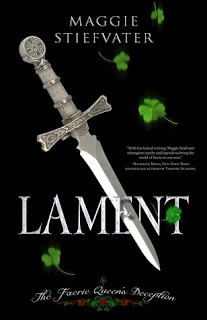 I might be in the minority when I say that I enjoyed Shiver by Maggie Stiefvater more than I did Lament. Lament is the first book in duology (yeah, I went there. Or go with Two-logy if you like), I believe, as there are two books in the series and I don't see mention of a third. But that doesn't mean Maggie isn't writing it right now. I'd keep up via her website rather than through me.

Lament opens with a really great prologue. I wish I could just type it all out here for you, but I think that might step on some copyright toes. It really engaged me, it was very powerful. There is a boy in a well and you have no idea what he's doing there and why he's so scared. Then you find out that he's being Hunted by a very powerful lady. It's quite a strange way to open because I wasn't exactly sure what was going on. But reading it again after finishing the book, makes it that more powerful.

Then we're introduced to Deirdre Monaghan. She's a gifted Harp player. And I don't understand what a crazy person her mother is, but Dee pukes every time she's about to play in public. And her mother came across as this pushy child-model-mom type. Even more so, Dee's aunt. Actually her mom really bugged me in the book; she refused to let Dee kind of break out of herself. She gave Dee no credit about the guys she hung around with. As if she would only have the personality bestowed on her by them, and her mother needs to weed out the baddies for her daughter's sake. Dee IS quiet, and sometimes I thought of her as a blank slate, personality-wise. But she starts to come into her own after meeting bad-boy-with-a-heart-of-gold Luke Dillon (And I totally imagined him as a young Dylan from Bev Hills. It has to be the name: Luke Perry/Dylan Whateverhislastnamewas).

I liked Luke more than I liked Dee. I won't reveal his background in the story but he has a mystery to him that is unique in teen fiction. There are faeries in Dee's world, but Luke isn't exactly like t 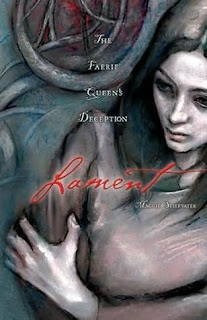 hem or one of them. He has his own secrets and most of the excitement in the book for me, was finding out the dirt on him. There's a part in the middle of the book where you're wondering why this amazing guy would out of the blue be infatuated with Dee. He just walks up to her, introduces himself and then says some pretty intimate things to her about her "potential" as a person. After he finishes holding back her hair while she throws up, that is. Anyway there's this scene in the middle fo the book where you suddenly see that Luke's motives may not be all that great and I really started paying attention.

I think the world in Lament is the strongest part of the book, for sure. There are faeries but they fall more into the category of magic realism. Their evidence in Dee's world was very subtle at first. I like this passage in particular:

"Didn't you ever wonder at the coincidence, that you and the Faerie Queen should be in such proximity? That a host of faeries should suddenly be on your doorstep?"
I felt foolish. "I--uh--guess I just thought there were a lot of faeries."
"They're here because of you. Faeries aren't like humans; Their realm and Their bodies don't really have fixed locations, like humans."
I seized the chance to look like I wasn't clueless. "You mean how some of Them use the energy of a storm, or a person, to appear."
Thomas nodded his approval; it made his curls bounce. I fought the urge to reach out and sproing one of them. "Exactly. Faeries are drawn to a certain sort of energy, and They move like satellites around that energy. The realm of Faerie centers around one person, the monarch--usually a human--who radiates that energy."

Dee's new psychic abilities come as a side effect of this phenomenon and I thought this was worked very well into the story. I really like this explanation for faeries in the world of Lament. It's quite unique.

I also want to mention how cool it is when the world of a novel extends beyond the story. Maggie Stiefvater has actually written and recorded music as a companion to the book. Hop over via the link to hear it. The Kiss, in particular is gorgeous. It really evokes the tone of the book; It is haunting and playful at the same time.
***
Kiirstin from A Book A Week read Lament alongside me and we had a great discussion about the book:

Mandy: Have you read any other teen books about fairies? Do you like fairies in fiction? I've only read Wicked Lovely. I can't say I'm a fairy person.

*does a little jig in the comments section*

Your book club "angle" to reviews is interesting. At the beginning of your review I was thinking, "Nah, this book isn't for me." But then you got into reviewing Luke and I thought, "I love bad boys/heart of gold/sinister motives (a la, Marcus Flutie in Sloppy Firsts)." But then I read the book review/chat portion at the end and agreed with both of you guys' sentiments that immortal characters trapped in the bodies of teenagers (with all that baggage) shouldn't come across as well-adjusted, it just doesn't sit right. (Think: Edward Cullen. Too idealistic, too poor of a character.)

All in all, I don't think I'll read this one. (However, I've had Shiver on my TBR, so this author isn't a loss for me.)

By the way, you totally need to read the Sloppy Firsts series (five books in all) by Megan McCafferty if you're looking for bad boy/perceived heart of gold/sinister motives that works. (Because he's not immortal. He really is 17-19 years old. With all of those flaws.)

I love Lament but haven't tried Shiver yet :)

I liked Shiver more than Lament too, and I liked Ballad more than Lament, though not as much as Shiver. I thought that Lament was confusing in places and I never really connected with Dee, but the writing is beautiful, and I loved the prologue too. Great review! And convo ;)

As always, another fabulous and convincing review!

I'll have an award for you on my Saturday post. :-)

Maggie's music is amazing -- a perfect companion to her books. I wound up listening to her song for "Ballad" while writing the review.

Love when you and Kiirstin get together to have book club!

I love when you guys do this! It's always fascinating, reading your different perspectives, and then your conversations about the book. Talk about giving the book a thorough review!

Thanks so much for this; I can't wait for the next one!