Review *The Vampire Diaries 1: The Awakening* by L.J. Smith

I'm a fan of the t.v. show. BUT, really only because of Damon and Caroline. I love their characters and can't wait to see what happens to them (and including any of the cast members of Firefly always excites me, however badly her character was written). So, within the first 5 pages of The Awakening my first blurted thought-to-mouth was "Where's Damon?!"

And he's in there, you just have to wait for it. Which I can do. I WAS disappointed with Caroline's character, though (in the book). She could have been a real Cordelia, but she wasn't amped up enough in the book. Which is one of my complaints in general: Vampire Diaries, the book, does not have punchy, memorable characters.
Although I was surprised by Elena's character. I really liked how desperate she was to win over Stefan. She claims a few times in the book that she will persue him TO THE POINT OF DEATH! This girl is passionate about her interest and doesn't balk to spread rumors that Stefan is a "Narc" (which made me burst out laughing--I'm sure everyone remembers someone who was called the Narc in school, it's classic and should be used more in teen fiction). Or to deliver flowers for herself from her fake boyfriend, Jean-Claude. Desperate and conniving, and great to see in a main character. I find Elena in VD the TV show (VDTV) kind of cardboardy. Definately not the Cordelia-type Queen of Cool that she is at the beginning of the book. I liked how hard she tried 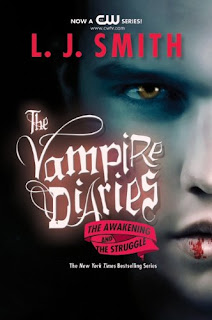 at the highschool level to bag, although she didn't know it, a man who is hundreds of years old.
"I've decided what to do my oral report on," [Elena] said, watching with narrow eyes as Bonnie finger-combed grass out of her curls.
"What?" said Meredith.
Elena tilted her chin up to gaze at the red and purple sky above the hill. She took a thoughtful breath and let the suspense build for a moment. Then she said coolly, "The Italian Renaissance."
Bonnie and Meredith stared at her, then looked at each other and burst into whoops of laughter again.
"Aha," said Meredith when thet recovered. "So the tiger returneth."
Elena gave her a feral grin. Her shaken confidence had returned to her. And though she didn't understand it herself, she knew one thing: she wasn't going to let Stefan Salvatore get away alive.
It's refreshing to see her engage him so openly and work to get his attention so obviously. I wish that L.J. would have played up the rivalry between Caroline and Elena over Stefan a little more instead of having Caroline just kind of fade away from the picture once S and E got going. But for the most part, I wasn't annoyed by Stefan as brooding and unattainable, because VD was written before Twilight and Buffy, for that matter: you can't be bothered, while reading, to be all "yeah, it's been done already".
Actually I'm really fascinated by where Vampires in highschool began, in fiction. VD is originally published in 1991. I didn't read it at the time it came out, but I don't remember anything else out there about vamps in highschool. Or really relating vampires to the teen experience. Interview with a Vampire was a great book at the time, but it wasn't necessarily about the teen years. And VD doesn't remind me of Interview with a Vampire at all, really. What are the original vampires in highschool/teen experience books?
Getting back to Damon, I am really actually looking forward to reading the second book in the series, The Struggle. Because now we're really going to get into the push and pull between Elena and her two guys. The Awakening is about Elena and Stefan; meeting each other, falling in love, she learning his secret, them sharing an intimacy that surprised me in the story (*** Hop to the bottom for a spoilery explanation, only if you've read the book or don't mind knowing). At the end of the first book I was hankering to jump right into the second book because I knew it was Damon's time to shine. Kind of cliffhangery on L.J.'s part, but not horrible seeing as the new editions have published two books in one. Otherwise, cliffhangers are unnecessary. They suggest that you don't trust the reader to keep reading the series based on its own merit, you have to trick them into needing to know what happens next because they've committed so much time already to the book and can't duck out now. The break between the books is more like a chapter break than a whole separate book with separate title thing.
I also appreciated how slow the build-up was to the story. There wasn't a lot of detail or particular attention to character development, but it also wasn't crashbang in your face with deaths and kidnappings to Georgia and running off into the nights. In this respect it was pretty tame, I liked the pacing of it. Any action was plotted well within the story, paced properly with the other social dramas happening.
Overall I hope Damon is as cool in the book as he is in the TV show. Although there hasn't been a lot of humor in the book, so we'll see. It has my interest and I was surprised by how much I liked the story.
I also love this artist rendition of Damon from L.J.'s website. Check it out for others, including Matt, Elena, and a surprising one of Stefan. 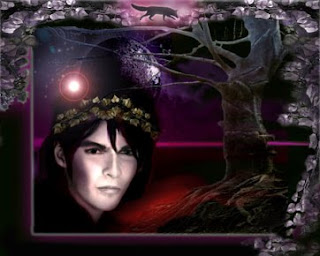 ***Spoilers Spoilers Spoilers Spoilers ***
In the book Stefan and Elena have only shared kisses and one night they drink each other's blood. This type of sensuality is always suggested in books with vampires who date girls, but not as obviously carried out. I found the book did a good job of making this trade have impact, like it really meant something as an act. Like you could see them doing it regularly, just for the connection it brings them. Kind of taboo to suggest to teens.
Mandy
Fun Vampire Diary Stuff!
Follow along to the TV show as Frankie parodies, in intense detail, each episode. Seriously, well well worth it. Via The First Novels Club blog.
Posted by Words Worth Blogs! at 4:16 PM

I LOVE the books. They are soooo different from the show, the show is definitely way funnier. But how interesting is it to see the original vampires in high school. Aren't there some really fascinating similarities to twilight...makes you wonder if Stephenie Meyer read these too when they came out. But so glad you're enjoying them! And thanks sooooo much for plugging my recaps:-)

I reckon TVD *is* the original vampires-in-high-school story. LJ Smith is my paranormal queen! TVD is actually my least favourite of her series, but it's still great. I'm a huge fan of the Night World books.

As far as I know, TVD and "The Silver Kiss" by Annette Curtis Klause were the first teen vampire novels period. And TVD is obviously first.

(And if you haven't read "The Silver Kiss," well, I know what we're reading next for our book club. :P)