*Jumps up and down excitedly, not unlike the pee dance, just jollier* Yvonne Prinz is Here! 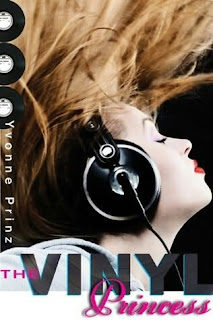 I really loved The Vinyl Princess--pop over to my review to see how. So I am beside myself that Yvonne (we're on a first name basis, now) was generous enough to respond to my fangirl questions!
*****

(Mandy) I think it's obvious within the story itself, but founding/owning/working in a record store really must have informed the details of Allie's home away from home. I'm thinking of how well you were able to create a very exacting experience of the community created by a record store in a cool part of town. I sense that there is a bit of your own heart in the setting of Bob & Bob's?

(Yvonne) Oh, yes, very much. I was amazed at the number of people who lived on the street when we opened Amoeba in 1990. We were quick to become a part of the community with all its quirks and eccentricities. The book is completely informed by my real life experiences working at Amoeba for five years. I heard a lot of sad stories, welcomed babies into the world, babysat puppies and made loans to desperate people. The street culture on Telegraph is sad and wonderful at the same time.

VP has been likened to High Fidelity by Nick Hornby. And you mention that you started out to write a High Fidelity for girls in your Q & A with Billboard. What is the history you have with the book? What about it appeals to you?

I really loved High Fidelity. It reminded me of my first record store job when I was seventeen. I know Nick worked in a record store too and you really have to have lived it to write about it. People who work in the stores are often struggling musicians as well which is an interesting ego type to have to deal with. Amoeba has always had rotating staff leaving on tour, which is just how it is. Nick got that in High Fidelity too, the musician/record store clerk type; Moody, fragile, sleep-deprived, egotistical.

I'm also very interested in how you developed Allie's voice, which is so distinctive and just so DEAD ON. And even Kit; too often it is so easy to write best friend characters as tonal extentions of the main character. But in VP you've created such strong, female voices which are very different from one another. What is your secret? Certainly some unholy power was called upon.

Oh, yes, I have a shaman who drops by and lights things and shakes rattles and we sacrifice a chicken or two.

No, really, Allie is more me and Kit is the “Me” I wish I had the confidence to be: Guy Magnet, great dresser, adorable.

I think that voice is a hard thing to describe but you know when you’ve nailed it. A good way to tell is if you can read back some sad dialogue that your character said and it makes you cry. Then, by gum, you’ve got it.

Is Allie's name short for ? Is this a shout-out to where you were born and raised? Is this mentioned in VP? Maybe I missed it.

Yes, there’s a funny bit at the beginning about how she got her name and yes, it is short for :

“I was born here in sixteen years ago. My mom named me Allie, short for . When my mom found out that she was pregnant with me, she did the math and discovered that I’d been conceived on their trip to the Canadian Rockies, a place called in the . She said that the skies were so blue, the mountains so majestic and the glacier-fed lakes so pristinely turquoise there that she had to name me after that place. My mom and dad had long dreamed of taking a “rugged” vacation together (and by rugged I mean a from the window of the luxury chateau and optional trail rides through previously mentioned mountains). Later, when I showed up earlier than expected, my mom re-did the math and realized that I’d actually been conceived in a rather down-in-the-heels hotel room on the same trip. But it was too late, I was Allie by then (she named me in utero) and Monty would have been a terrible name for a girl.”

What is the coolest part about writing for teens? What is the best part of the journey so far?

I had no idea how the VP would be perceived but the response has been great. I guess the best part about the book is that I get these beautiful letters from girls telling me that the VP makes them feel like they belong somewhere. I wasn’t expecting that at all. I’ve saved them all (not the girls, the letters). It’s nice to reach out with a book and know that someone is reading it and getting it.


I'm pretty excited about rumors that you are working on a book called "All You Get is Me", which will be out in 2011. Is it too soon to talk about what it's about?

No, in fact, I just finished the edits so it’s very fresh in my mind. “All You Get Is Me” is about a girl named Roar (short for ) whose father, a human rights lawyer, up and buys a farm shortly after ’s mother disappears from their home in . Roar, a city girl through and through, wants nothing to do with farm life until a series of events pulls her into her new life and she opens her heart to the Migrant Farm workers and the hardworking people who live in the community. It’s a sort of a modern Day “To Kill A Mockingbird” with racism and social justice at it’s center. Oh, and a boy from LA figures strongly too.


(Ah me. I feel like a dope for overlooking the ENTIRE paragraph where my answer about Allie's name could have been answered for me. I swear I completely missed it)

Thanks SO much, Yvonne!

Really cool interview. And Mandy, I'm actually glad you missed that bit about the explanation for Alberta's name, because I loved that little excerpt!