Review *The Vampire Diaries 2: The Struggle* by L.J. Smith 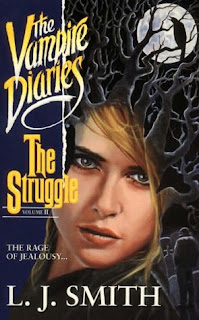 Just the other day I was reviewing the first book in the series, The Awakening, and the ending of each book is such that you have to just keep reading into the next one. The final scenes are cliffhangers and the first sentence of the next book is the last sentence of the one that you just finished. It was a smart idea for Harper Collins to print two books in one, with a few teaser chapters of the third book even, in one volume. I would have been so mad finishing each book on such a cliffhanger. It makes you just keep reading, too. But you know what else kept me reading? Damon.

Here's a sampling of my reading notebook that I keep to remember parts I like for my reviews:
261: Hot
258: Hot, with eyebrows
I was most excited about The Struggle because I felt Damon was only introduced in the first book. In the second one, the tension is on now between Damon and Elena, and Damon and Stefan. While I still found him elusive, you get way more of him in Book Two.
Here's a little taste of the above pages I wanted to remember to quote: 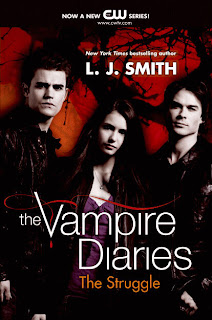 "I'm talking about Power, Elena." Suddenly, [Damon] stepped close to her, his eyes fixed on hers, his voice soft and urgent. "You've tried everything else, and nothing has satisfied you. You're the girl who has everything, but there's always been something just out of your reach, something you need desperately and can't have. That's what I'm offering you. Power. Eternal life. And feelings you've never felt before."
She did understand then, and bile rose in her throat. She choked on horror and repudiation. "No."
"Why not?" he whispered. "Why not try it, Elena? Be honest. Isn't there a part of you that wants to?" His dark eyes were full of heat and intensity that held her transfixed, unable to look away. "I can waken things inside you that have been sleeping all your life. You're strong enough to live in the dark, to glory in it. You can become a queen of the shadows. Why not take that Power, Elena? Let me help you take it."
Hot. And I love that on PAGE TWO Damon's eyebrows already have center stage:
[Elena] clenched her fists. "Where's Stefan?"
A line appeared between Damon's dark eyebrows. "Stefan who?"
The Struggle seemed to lack the focus and build of the first book. All kinds of things were happening--Hallowe'en dances and stolen journals, dead History teachers. Bonnie gets a little more central action as the psychic trance lady, alerting Elena and Stefan to surrounding dangers. She also gets an off-screen kiss from Stefan--Hello, L.J., please write this hot scene into the story! And I'm still not so sure about Meredith who seems to have no personality at all. I can understand why she wasn't written into the TV show. There's nothing really to work with.
A new addition to the plot was the introduction of the new history teacher, Alaric Saltzman. On his first day of class he gets everyone to turn their desks into a circle and he asks them to spill about their traumas regarding the death of their old teacher, Mr. Tanner. Then just as class is wrapping up he's all: "How about if you all come around to my place this evening, and we can talk informally? Maybe just get to know each other, maybe talk about what happened...I'll provide the refreshments." Okaaaayy. Alaric is being so obvious. He even suggests to the class that coming to his party counts as participation marks in his class. So weird. By the end of the book you don't have a sense of his motive, but I'm sure he's just getting going in The Struggle.
Actually, one of the most awesome scenes in the book happens at his party. Damon hasn't been introduced to the characters outside of Elena's sightings of him. His grand social entrance is when Elena reaches for a breadstick and chews one end of it. Suddenly, a form lunges toward her saying "Mind if I have a bite?", and Damon bites off the end of the breadstick, "in that moment, their lips were only inches apart." It was really funny. Presumably all the girls were like "oh, what a suave College guy". Can you imagine anyone doing this at a party. Especially if you didn't know they were right beside you?
I was also hoping for a little more from Caroline's character. She hooks up with Tyler from book one *barf*, and exacts a pretty petty revenge on Elena for being the coolest girl around. What Caroline isn't realizing is that Elena is naturally pulling away from her old life at school because of the secrets she has to keep. She's not the "it" girl anymore. And you're second in command; just give it a little time and there will be room at the top for you. Caroline could be a strong nemesis for Elena, but I just haven't seen it yet. She's too easily overwhelmed by her jealousy to properly execute her plans. She's Damon to Elena's Stefan and I'd love to see her as a more formidable foe.
Another theme that really keeps me reading this series is the play of darkness and light and the push-and-pull it creates, looking for balance. Damon hates Stefan because he has light in him, because he cultivates goodness. Stefan hates Damon because he is only darkness and refuses to imagine any other way. Elena is a bit of both. She's described as an Ice Queen with a raging fire inside her. She's capable of loving her friends and family, sacrificing herself for others, but she's super-spoiled and entitled. It makes her think she can do whatever she wants, regardless of the people around her. Matt accuses her of only thinking of herself. And she tries to deny her passion for Damon. At the end of book two you get a real view into her true character and the potential she has for being bad.
The ending of The Struggle really surprised me. I can absolutely say that I have NO idea how the series will continue. Many things happened that are irreversible, and huge. Things that other teen vampire romances never quite broached. So I'm looking forward to The Fury, book 3. Oh, L.J., you have me hooked!
Mandy
Neat factoid: The Fury was originally the last volume of The Vampire Diaries, which was intended as a trilogy. Pressure from fans at the time caused L.J. to write a fourth book, Dark Reunion. And a new VD trilogy is in the works, The Vampire Diaries: The Return. The first title, Nightfall, came out last February and the next two books will be out this March and July.
Posted by Words Worth Blogs! at 1:02 PM

LOL Damon's eyebrows. Now I want to reread those books. Sigh. They are TOO fun for words.

I only read the first two, but depending on your review of the third one, I may just have to continue!

I can't tell you how much fun it is that you're part of the Vampire Diaries madness too!

Frankie: Yeah, and I have NO idea where, plot-wise, they'll be going in book 3. NO IDEA!!

Donna: I was reluctant to like VD. Now I'm all like "Hey Boyfriend, can you get me the new Nylon magazine because there's a feature on VD?"

Boyfriend: "Yeah, I brought it home for you already *Because of your constant talking about VD*"

Me: *insane noises followed by a huge coffee brew, a blankie pull-up and a good sit n' read*