I LOVE all things steampunk. And I LOVE anything by Scott Westerfeld. So when I laid my hands on Leviathan, the first of his steampunk-inspired, totally amazing series in the fall of 2009, I was smitten. Behemoth came out next, and this fall the conclusion to the series arrived in our little bookstore to much fanfare (mostly from me). Scoot over here to see my review of Goliath to get a feel of what this series is all about.

The good folks at Simon and Schuster Canada set me up with an interview with Scott Westerfeld and his thoughtful answers are reproduced below. It seems much more steampunk to use last names only so Scott is "Mr. Westerfeld", and I will be, um... "Mrs. Sommerfield -Smith" (oh, why not?) So, as they say, tie up your dirigible and stay awhile!

Mrs. Sommerfield-Smith: You’ve done an amazing job of creating a fascinating alternate WWI history in the Leviathan series. You create some great “what if” scenarios and divisions (Clankers vs. Darwinists, boys vs. girls (!)). In your afterword to Leviathan you mention that “the nature of steampunk is blending future and past” and that your series “is as much about possible futures as alternate pasts.” Could you elaborate on this?

Mr. Westerfeld: Steampunk is about messing with history, Victorian history in particular. It's about bringing a flame-thrower to a tea party, while still wearing an appropriate silk cravat. So it's not just a mix of future and past, but of refinement and mayhem.

Mrs. Sommerfield-Smith: Why did you decide to give these novels a steampunk aesthetic? Where did you first encounter steampunk?

Mr. Westerfeld: My first steampunk experience was at Disney World. I was about eight years old, and went on the 20,000 Leagues Under the Sea ride. Something about a nuclear submarine with a pipe organ and baroque stylings really clicked with me. It's that strange mix of technologies and time periods that make certain people love steampunk.

Mrs. Sommerfield-Smith: I’ve noticed steampunk appearing more and more in literature, but also movies and television. Neil Gaiman recently wrote an episode of Doctor Who that had a decidedly steampunk feel. Are there any TV shows with a steampunk look/philosophy that have drawn your attention?

Mr. Westerfeld: I think the movie world (and more recently TV) likes the look and feel of steampunk, but doesn't know what to do with its broader themes yet. Steampunk is about rewriting history, in effect, pushing back the constraints that society placed on people because of their gender or beliefs or who their parents were. And there has yet to be a TV version of steampunk that addresses that larger project. I will admit that I grew up with The Wild, Wild West, however, and that I desperately wanted my own personal gizmo-filled train car.

Mrs. Sommerfield-Smith: In addition to your extremely successful YA series’ you’ve written five science fiction novels for adults. Why did you decide to write for young adults? What are the particular merits of writing for this audience?

Mr. Westerfeld: Teenagers are voracious readers, they send more and better fan mail, and they aren't as limited in their genre choices as adults. But I think the coolest thing about them is how engaged with language they are. At any given moment, more teenagers than adults are studying a foreign language, writing poetry, memorizing song lyrics, and making up slang. Teens are still acquiring language to some extent, and thus they take more joy and interest in the way novels play with words. As a writer who likes to generate slang and other kinds of neologisms, I find them a much more engaged and exciting audience with which to communicate.

Mr. Westerfeld: I would send Keith first drafts of three or four chapters at a time, and he would respond very quickly with sketches, so we were bouncing back and forth from the beginning. Often I would rewrite based on his illustrations, because I soon found that he was a better engineer than me, and sometimes a better researcher as well. So at times I would be quite general, "Something's going to chase in them in a couple of chapters. Could you draw something fast?" and then let my writing follow his art. 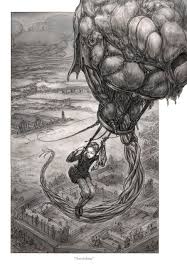 Mrs. Sommerfield-Smith: The internet, do you love it or hate it? Does it help or hinder you as a writer? Are there benefits and/or pitfalls to having a presence online while being an active writer?

Mr. Westerfeld: I think being in touch with readers is a great experience. Teens are wonderfully frank about what they like and dislike in my fiction, which is a really great kind of feedback to get. But the best thing about the internet is the way that teens engage each other, forming communities of readers. And these communities spread outward from the books to the wider world, as with the Harry Potter Alliance and its charitable works. A love of books has always been a way for like-minded people to find each other, and the internet has only made that project more vast and wonderful.

Mrs. Sommerfield-Smith: Your series, Uglies, has a brilliant new sci-fi take on that old (teenage) chestnut: “Be yourself”. In Leviathan, Deryn disguises herself as a boy to join the British Air Force and must be careful not to let her secret slip. I like the fact that you’ve drawn Deryn as an independent, strong-willed young woman, but she’s also not without insecurities and prejudices. What is so unique about this time in a child’s life when they are coming-of-age, and why is it such a fascinating theme to write (and read!) about?

Mr. Westerfeld: I agree that the theme of teenage fiction is Identity. Young people are still figuring out who they are, after all. (Everyone is, really, but teenagers are better at admitting it.) Because the teenage years are filled with epic firsts—first love, first betrayal, first true loss—it's a tremendously dramatic time to write about.

Mrs. Sommerfield-Smith: I like the way the adults in this novel, particularly Dr. Nora Barlow, seem to be positive influences on Deryn and Alek. Was this a conscious choice?

Mr. Westerfeld:I think Barlow and Volger have both positive and negative aspects. They provide a lot of good advice to their young charges, but their overall worldview is one of conflict and competition. Deryn and Alek, on the other hand, are learning the importance of working together across lines of ideology and class. So it's up to my younger characters to separate the good from the bad when it comes to their elders' example and counsel.

Mr. Westerfeld: I'm lucky in writing for young adults, in that my books don't get categorized as much. I've written science fiction, fantasy, contemporary realism, and now steampunk, and yet all my books can sit happily together in the teen section of the bookstore. And that's all us writers can really ask for, that our books be findable! All the rest of it is for the critics to worry about.

Labels: Dystopian and SciFi, For the Dudes, My Favourite Posts, Steampunk Love