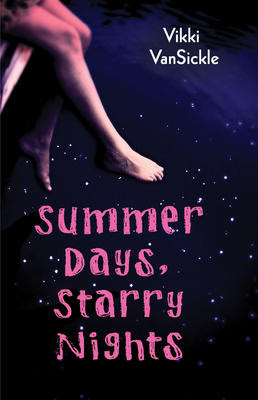 Summer Days, Starry Nights is a sun-kissed story that opens with a spark which quickly turns to flame: Reenie’s mother, Mimi, is missing. When she reappears we find out that shiny, exotic Mimi who once dreamt of being a star and whose dark, silent moods could strike at any time, ran away without even leaving a note. The secrets and uncertain moods of Reenie’s mother aren’t the only threat to her family’s happiness, though. Business is in decline at their resort, Sandy Shores, and Reenie is worried; she loves her home - the lake and the sand, the cabins and the customers - more than anything. She can’t bear the thought of losing it.


Then Gwendolyn Cate arrives – Mimi’s solution to all their problems. Gwen is a ballet dancer in training from Toronto, come to shine things up a bit. But Reenie’s memory of the fairy-like girl turns out to be just that: a memory. At first, Gwen seems like another person entirely, keeping secrets and not letting Reenie in. Gwen is friendly, but not as friendly as Reenie wants her to be. She wants a best friend, not an older sister. So Reenie decides to take matters into her own hands and figures out a way to simultaneously draw out Gwen’s secrets, make everyone happy, and save Sandy Shores. Only things don’t quite go as planned.

I found Reenie so endearing. She's eager to prove herself, as well as at ease in her home - whether she’s fishing with her dad, taking care of her little sister, or accommodating customers. She’s on the cusp of adolescence, a teenager and yet not quite a teenager, wanting more responsibility but not realizing what that responsibility entails. Inevitably, she makes mistakes and learns about herself along the way. I most especially loved her relationship with her father. She admires him and longs for him to see just how capable she is.

Altogether, Summer Days, Starry Nights is warm and delightful summer reading, perfect for preteens and younger teens. It evokes that camp or cottage feel, as well as that time in life where you just want to be able to test your wings and see if you can fly.

I couldn’t put it down.

-Kristen
Posted by Words Worth Blogs! at 5:37 AM