Q & A with Vikki Vansickle 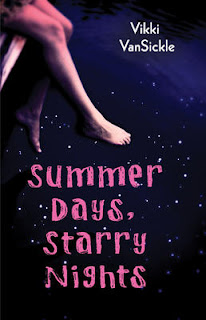 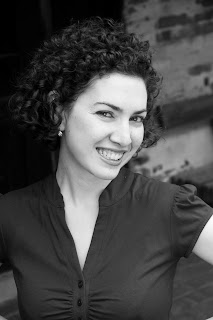 Vikki VanSickle is the author of three middle grade books: Words That Start With B, Love is a Four-Letter-Word, and Days That End in Y. Her most recent book, Summer Days, Starry Nights, is a YA novel that was just released this month.

Kristen: Vikki, I mention in my review that I couldn’t put Summer Days, Starry Nights down. It cast this warm, lovely spell over me, which is why I was so excited about this interview. I have so many questions!

Vikki: Yay! That is so nice of you to say!

Kristen: First of all, where did this story come from or what inspired you to write it?

Vikki: Reenie Starr literally walked into my head one day while I was on a two day break between camp sessions up north, staying at a friend’s house in Sudbury. I had a very clear sense of her voice and her family right away.

When I was a child my family rented a cottage on a family resort much like Sandy Shores for a week on Lake Dalrymple (near Orillia, ON), which I loved. I never wanted to leave, and so as an adult I imagined what it would be like to live there! One of the joys of fiction-writing is living out your own fantasies (to an extent).

Kristen: I loved everything about the setting: northern Ontario, the resort environment, the 60s! What about this place and time period appeals to you?

Vikki: I’ve always loved the 60s, particularly the music and the sense of change that was in the air. My favourite kind of story is a poignant coming of age tale and in the 60s it was like the whole world was coming of age. It was a particularly interesting time for women. All three women in the story, Reenie, Gwen, and Mimi, are products of their respective eras and are pushing against what was expected for girls at the time. Mimi is less successful, but in 1960s women were breaking boundaries all over the place. I read two fabulous nonfiction titles about women and music in the 60s, Girls Like Us by Sheila Weller and Girl Groups, Girl Culture by Jacqueline Warwick, which really helped shape Gwen’s character and provide insight into what the music industry was like for women at the time.

As for the location, it was loosely based on the resort my family visited when I was a child. I have very vivid memories of my time there. I’ve always associated summer with the 60s, probably due to movies like Dirty Dancing, My Girl, and My American Cousin. A summer story NOT set up north would have been very strange for me!

Kristen: Mimi, despite her flaws, was probably my favourite character in the book. I really felt her longing, and her sadness, and I so badly wanted to know why she was the way she was. Her running away right at the beginning had me immediately hooked. Which was your favourite character to write and why?

Vikki: I’m glad you felt for Mimi! She was the most interesting and difficult character to write because she makes some bad parenting decisions which end up hurting her children, particularly Reenie. Depression was not talked about widely in the 50s and 60s. Mimi would probably not refer to her own sadness as something as chronic as depression, which is something people today still don’t do and why it’s important to be open about mental illness. Mimi isn’t a bad mother, nor does she hate her lot in life. But she does have difficulty facing the world sometimes.

Gwen was the most fun to write about. She is the cool, older sister I would have loved to have. I love how fully she embraces life and how willing she is to take risks. She is the girl Mimi could have been in a different time period given different choices.

Kristen: How long did it take to write Summer Days, Starry Nights? Was the process mostly the same as your other three books, or completely different?

Vikki: The process was similar in that I didn’t write in order. I don’t outline and I am wary of too much pre-planning. Instead I wade around the story, jump from scene to scene, and try things out until I eventually have so much material I need to step back and think about ordering it in some way.

Summer Days, Starry Nights took a bit longer to write (about 2 years) and was almost double the length it is now. Originally it took place over a number of years and was titled The Seven Summers of Reenie Starr (I still really like this title, although it clearly doesn’t work anymore!) Eventually I realized a lot of those summers were back story for my benefit, but the reader didn’t need to be privy to all that detail. This meant that I made a huge cut, which is something I’ve never done before. It was scary, but also very liberating.

Kristen: I'm fascinated by authors who write out of order. I'm also curious about where you write. Do you have a special or favourite place?

Vikki: I tend to write in my room or in a little sun room/office space off the kitchen in the house I share with my roommates in Toronto. I prefer to write early in the morning when my brain is open and no one else is up yet. I drink pots and pots of tea and take many breaks to pet the cat. If I don’t, she takes it out on my poor laptop!

Kristen: Okay, more writing-related questions: Why do you write? What are the best and worst parts? What was your favourite part of writing Summer Days, Starry Nights?

Vikki: I love people. All of my books start with a character’s voice in my head. Eventually it gets to the point where I can’t ignore the voice and so I start writing. For me, the best part of writing is getting carried away by the story and all of a sudden two hours have gone by and you have a new twist or a new character.

The worst part for me is breaking to go about the regular business of life, like going to work or doing chores. Some days my story is taking up such a huge part of my brain it’s a miracle I can get anything else done!

Kristen: What have you been reading lately that you absolutely love? Or what is one of your all-time favourite books? (Feel free to name a few if you can’t pick just one.)

Vikki: I am bad at picking favourites, but lately I have loved Eleanor & Park by Rainbow Rowell and Code Name Verity by Elizabeth Wein. One of my favourite summer books is Kit Pearson’s Looking at the Moon. I love how Pearson catches the mood of the 1940s and Nora’s growing sense of self in the world around her. In some ways Summer Days, Starry Nights is just as much a tribute to that book as it is to Dirty Dancing.

Kristen: I definitely felt the Kit Pearson influence in Summer Days, Starry Nights, which I adored. And I loved Eleanor & Park too! Ow, my heart. Okay, last question: Do you have a favourite band from the 60s?

Vikki: Again, I am terrible at picking just ONE, but I love The Marvelettes, The Shirelles, The Crystals, Lesley Gore, and The Beatles (of course)!

Kristen: Thanks so much for taking the time to answer my questions, and thank you doubly for writing such a lovely book!

For those of you who haven't read Summer Days, Starry Nights yet, check out our review and Vikki's awesome pinterest board, and then go grab it!
Posted by Words Worth Blogs! at 5:27 AM