We're pretty excited to have a guest with us today: Heather Smith, the author of Baygirl, which hit shelves this month. And we're doubly excited to be hosting her launch at the store this saturday.

Hi Heather! I’m so happy to get a chance to chat with you (and to be a part of your launch!!). First off, can you tell us a little about yourself?

I was born and raised in Newfoundland but now live in Waterloo with my husband and three children. I enjoy running and drinking green tea (not at the same time, that would be dangerous). I’m a terrible multi-tasker and am easily distracted. I actually don’t know how I managed to write a book, but I did, and I hope to do so again, many times over (I’d write different ones of course, writing Baygirl again would be silly).

You are delightful. Okay, in one or two sentences, tell us about Baygirl. Why did you write this book in particular?

Baygirl is the story of a sixteen year old girl whose typical teenage struggles (fitting in, falling in love, finding oneself) are further complicated by the unpredictable behaviour of her alcoholic father. 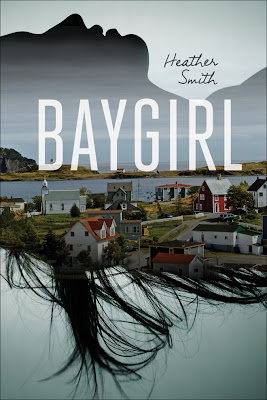 Although I cannot relate to Kit’s predicament firsthand, as a teenager I had a couple of close friends whose fathers were alcoholics and, as a result, have seen and heard things that stick with me to this day. I’ve witnessed major blow-outs (like the ones Kit and her father regularly have in the book), as well as other, more subtle interactions that can be equally damaging – snide remarks, accusing looks, cold shoulders. I always wondered - how does one forgive the person who has caused them to live their life walking on eggshells?  This is the question I wanted to explore when writing Baygirl. This is why forgiveness is Kit’s biggest dilemma.

Alcoholism touches the lives of many people, both directly and indirectly. That is why Kit’s story was an important one to tell. I hope that anyone, teen or adult, who has spent their life walking on eggshells, can find some comfort in Baygirl.

Addiction can have such a devastating effect on a person’s life, along with the lives of those they love, and it’s a very difficult thing to escape if one manages to escape it. But it's a real thing that happens to families, and in light of that, I think you portray Kit’s father in a way that’s really fair.

Because we’ve chatted before, I know that you’re originally from St. John’s. Why did you choose to split the book between the city of St. John’s and the town of Parsons Bay?

Yes, St. John’s is my birthplace … which makes me a townie! When writing Baygirl, I thought it would be fun to give my main character a different perspective from my own, so Kit became a “baygirl”.  Splitting the book between the “town” and the “bay” really drove home the differences between the two places and, ultimately, the people who live there. Highlighting the prejudices and preconceived notions that townies have of people from the bay (and vice versa) added to the drama of Kit’s move to the city … as if she didn’t have enough problems!

I really loved your contrast of the town versus the bay. As someone who grew up on a farm but now lives in the city, I could definitely relate to Kit and the uncertainty she feels about where she belongs.

I have to say that my favourite character overall was definitely Kit’s new neighbour, Mr. Adams. He was so endearing, he made me laugh out loud, and his dialect was delightful. You captured him so perfectly. Who was your favourite character to write? Who gave you the most trouble?

My favourite character to write was Mr. Adams. I knew when writing Baygirl that Mr. Adams would be an Englishman and making him hail from Yorkshire was a no-brainer. You see, thanks to the delightful writings of James Herriot, I have a major obsession with the Yorkshire Dales.  In All Creatures Great and Small, Herriot paints a picture of the Dales that is so appealing it makes me want to trade in my life in Canada for a thatched cottage in a Yorkshire village full of quirky townsfolk. It makes me want to pull on a pair of wellie boots and a wax jacket and go frolicking through the dewy meadows. Given my fascination with James Herriot, I’d be gormless (I say, gormless!) not to make Mr. Adams from Yorkshire.

The character who gave me the most trouble was … Mr. Adams. Ee by gum, that dialect was tricky!

Wow, I would never have guessed that you had trouble with him. He really was perfect. And a thatched cottage in a Yorkshire village sounds so cozy and quaint!

Without giving too much away, writing (and writing poetry specifically) becomes a way for Kitty to work through the things that are happening in her life. Was that a conscious decision on your part, or did that happen naturally?

This was not a conscious decision at all. This book was written fairly chronologically, so when I got to the part where Kit was missing Parsons Bay having her write a letter to Anne-Marie came naturally. I wanted to illustrate how devastating moving away can be by showing, through Kit’s letter writing, how her and Anne-Marie were drifting apart. This naturally evolved into writing becoming an outlet for Kit and, from there, became more of a theme throughout the novel.

How long did it take you to write this book? What was the hardest part and what was the best part?

I started writing Baygirl many years ago when I was in a writing class led by Kathy Stinson. The book got off to a great start but, at the time, I had three young children and writing time was limited.  It eventually became a forgotten file, lost on my computer, until two years ago, when my youngest started school full-time. It was then that Baygirl was resurrected and I was able to give it the quality time it deserved.

The hardest part of writing Baygirl was the editing process, although I think a more fitting word would be challenging. I say this only because Baygirl is my first published novel and the whole process was new. I’d never worked with an editor before and the whole idea was initially daunting. As it turned out, however, the editing process was also thoroughly enjoyable. My editor, Sarah Harvey, was (is!) fantastic and working under deadlines made me push myself in ways that only a ticking clock can do. I loved the going back and forth, the tightening of text, the whittling down of words. The whole process truly made me a better writer.

The best part of writing Baygirl was when I’d be struck by moments of clarity - when the tangled knot of words I’d been staring at for hours would magically unravel to become what my mind’s eye had intended them to be. It really is the best feeling and is my favourite part of writing in general.

Are you like Kitty - do you use writing as a way to work through things or respond to the world around you? Or do you write for other reasons?

I absolutely write as a way to work through or respond to things. I don’t know how many times I have written full essays that never see the light of day. For me, the act of writing it down is a release. Once it’s on paper I can move on.

Mostly I write because I have no space in my head for the stories that live there, so I evict them and help them find their home on paper.

Do you have a special or favourite place to write?

At home, in my empty, quiet house.

Because writing and reading are so inter-related, I have to ask: what have you been reading lately that you want to shout about from the rooftops?

The last three books I have read have all been great and are all very different from each other.

Annabel, by Kathleen Winter.  Beautiful, haunting, one that stays with you long after you’ve snapped the book shut.

The Rosie Project, by Graeme Simsion. This book reads like a Hollywood romantic comedy script, which isn’t always my thing. But the main character is so quirkily charming I was quickly whisked off my feet and didn’t touch solid ground again until I’d reached the last page.

Three Day Road, by Joseph Boyden. Interesting look at World War I through the eyes of an aboriginal solider. I’m always amazed when horrible things are told in a beautiful way.

Ah, I’ve been wanting to read Annabel for a long time now. Maybe this will be my reason to finally pick it up.

Okay, last of all, what are you working on right now? Can you tell us a little bit about your next project or is it top secret?

My latest project is about a teenaged boy who, in a bid for attention, vandalizes a war memorial just days before Remembrance Day. After navigating the youth justice system alone, he is placed in a community service program in which he must regularly meet with a World War II veteran. The subject matter is pretty heavy at times but the stories that are told are ones that should never be forgotten.

Whoa. I am intrigued. I can’t wait to read it! Thanks so much for answering all my questions, Heather, and I look forward to your upcoming launch!

Words Worth Books will be hosting Heather's book launch this saturday, September 21, starting at 7pm. Come hear Heather read from the book, pick up your own signed copy, and enjoy some Newfoundland songs and snacks.