My Favourite Reads *The Witch of Blackbird Pond* 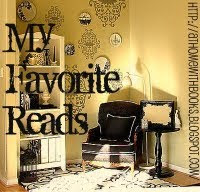 I read The Witch of Blackbird Pond probably when I was 12 or 13. I remember the cover (top right) vividly; this is the edition I read and re-read. It wasn't my absolute favourite book, and I remember not loving it as much as I loved The Crucible, but it did something for me at that age. And I actually re-read it for the first time in years about 6 months ago.

Forced to leave her sunny Caribbean home for the bleak Connecticut Colony, Kit Tyler is filled with trepidation. As they sail up the river to Kit's new home, the teasing and moodiness of a young sailor named Nat doesn't help. Still, her unsinkable spirit soon bobs back up. What this spirited teenager doesn't count on, however, is how her aunt and uncle's stern Puritan community will view her. In the colonies of 1687, a girl who swims, wears silk and satin gowns, and talks back to her elders is not only headstrong, she is in grave danger of being regarded as a witch. When Kit befriends an 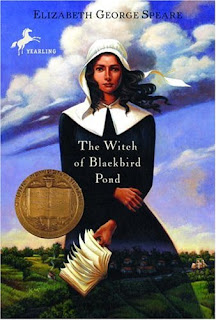 old Quaker woman known as the Witch of Blackbird Pond, it is more than the ascetics can take: soon Kit is defending her life. Who can she count on as she confronts these angry and suspicious townspeople?


I remember at 12 having a fear of mob-mentality because of this book, how a whole lot of people can just be so wrong and cruel. I wanted to run away to the "old Quaker woman's" little shack where she just seemed to hang out all day making tea from herbs in her garden. I felt Kit's burden of family members watching your every movement to judge its moral and social rightness. Re-reading it 6 months ago I had forgotten about the drudgery of this community's everyday life and how it is juxtaposed with the stark fear and persecution that can flare up suddenly and violently in its townspeople. Overall, I still stand by Witch as a good historical read and the original cover still draws me in to its story. Although the newer cover (right bottom) gives more of an indication of the setting and story, I find the older cover more evocative (even though when I was 12 I was still slightly disappointed that there were no "real" witches involved--I loved the horror genre then).

My Fvourite Reads is a weekly meme hosted by At Home With Books
Posted by Words Worth Blogs! at 5:25 PM

My most vivid memory of this book is that my mom wouldn't let me read it because it was about witches. I don't think she took the time to actually see what the book was about. I grew up in a very strict religious household, and nothing about witchcraft was acceptable to read. I find it highly ironic as an adult, considering the subject matter of the book. I still haven't read the book (not because of the subject matter, but simple for lack of time). I will have to read it some day.

Alyce: It DOES hold up, reading it as an adult. Thanks for the visit!

This book really changed my outlook on religious communities and helped along a love of history. I think I read it about the same time you did - at age 12 or 13. I still have a copy and enjoy reading Kit's story over again. But I think the best part is that this book introduced me to the works of Elizabeth George Speare, all of which are amazing. The Bronze Spear, Sign of the Beaver and Calico Captive are all favorites (and amazingly well-written). Wonderful pick!

Celi.a: Oh, you know I've never read any of her other books. I'll look into the titles you've listed. I think I was about 14-15 before I started paying more attention to authors, like seeking books out by author rather than cover art or by title. Thanks!