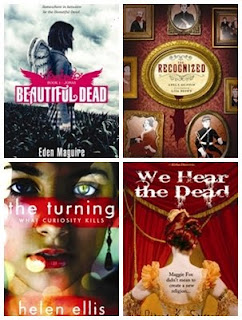 Sourcebooks is launching a teen imprint line of titles called Sourcebooks Fire in Spring 2010.
Holy Crow, check out the covers!

From the Publishers Weekly article:

In its debut season, Sourcebooks Fire will release seven titles, including Beautiful Dead Book 1: Jonas by Eden Maquire, first in a bestselling paranormal romance series from the U.K. (March 2010); Recognized by Adele Griffin and Lisa Brown, a novel based on the true-life story of teenage sisters who invented the séance in 1848 (June 2010); We Hear the Dead by Dianne K. Salerni, a romantic mystery set against the backdrop of the Civil War (May 2010); and The Turning Book 1: What Curiosity Kills by Helen Ellis, a supernatural thriller set in New York City (May 2010), among others.
I want them all but Beautiful Dead is my favourite cover of the bunch. I don't quite have a handle on the premise. Something about seeing dead people who are in limbo and having to help them, but also the main character's friends are all dead...(?). I should write back jacket synopsis (synopSEES) professionally.
Mandy
Posted by Words Worth Blogs! at 6:16 PM

I like your synopsis. :) Also, those covers are gorge-mous!

The covers are all so pretty - I can't decide if Beautiful Dead or The Turning is my favorite.

The dead cover is indeed the most beautiful one of the bunch. :)
We hear the dead sounds and looks great.