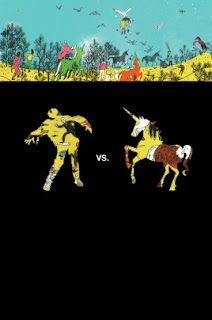 I am an un-ironic Unicorn fan. And, like my new love for horses, it developed in my adult years. I didn't really grow up loving the Unis (YOU-nees, not youniss, for obvious reasons). So deciding between Zombies and Unicorns is easy for me. Plus, riding a Unicorn out of danger is faster than a zombie piggy-back.

So I will need to get my hands on this book:

Zombies vs. Unicorns, just announced by Simon & Schuster, will be a collection of essays detailing the pros and cons of both the shambling undead and the horned horses. The idea for the book came from a series of blog posts between authors Holly Black (The Spiderwick Chronicles, Ironside) and Justine Larbalestier (Liar, How to Ditch Your Fairy) that started in 2007 and grew from there. A number of big names from the young-adult circuit, including The Princess Diaries writer Meg Cabot, have contributed individual pieces on one of the two creatures, all of which are tied together by a running deliberative commentary from Black and Larbalestier as they argue for Team Unicorn and Team Zombie respectively. (From EW)

Ha! And over on the official website, Unicorns are in the lead! People who love Unis over Zombs include: Meg Cabot, Kathleen Duey, Margo Lanagan, Garth Nix, Naomi Novik, Diana Peterfreund.
(First seen on Holly Black's Blog)
Mandy
Posted by Words Worth Blogs! at 4:38 PM

That is like the coooolest cover of the year, among a lot of contenders!

This is so great.

Oh c'mon. Everyone knows that zombies are cooler than unicorns!

That's hilarious. This is what I get for not joining the blogosphere til 2009 -- I'm totally unaware of this awesomeness.

Donna: Courtesy of the illustrious Holly Black!! What a babe!

Jon and Robby: Yeah I forgot to add the link to see the cover pull out. It is amazing and Boschian. Click through via the website link.

Shannon: I know, SO weird and awesome!!