Bad Apple was a lot lighter than I expected. It initially seemed to be about a sixteen year old student and her art teacher having an affair, but that turns out to be not quite the truth. Even when I read some of the author blurbs on the back from E. Lockhart and Libba Bray saying ho 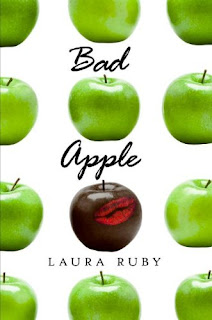 w "wickedly funny" this book is, I was kind of like "How will a book about such a topic be so funny?" But it was. It was totally funny.

Tola Riley is a freak at school. She's sardonic and irreverent and people don't know how to take her so they dismiss her as nuts. When gossip starts circulating that she's having an affair with her art teacher, Mr. Mymer, everyone just thinks it's "something Tola would do". The book opens just after the police investigation into their relationship. Mr. Mymer has been cleared of charges, having no solid evidence and since Tola refuses to speak out against him, he's preparing to resume teaching at another school. Then the internet sites start. Message boards and photos supposedly documenting their affair pop up online. Tola is even more outcast as everyone scrutinizes and judges her for their supposed relationship.

Tola also has a lot going on at home. Her mother is so angry that Tola refuses to "admit" that Mr. Mymer had an indecent relationship with an underage girl, and thinks she's lying when she says it never happened. Tola's father is recently re-married and her step-mom hates her. Tola's sister is depressed and distant. She's also being bullied at school by her old best friend who is deeply creepy. When all of this catches up to Tola, she starts to lose it and decides the best way to express this anger inside her.

Madge laughs. Her laughs are more like the shrieks of banshees. When Madge laughs, puppies have nightmares.

***
I say, "Anyway, I thought we were talking about my outfit."
"The outfit is part of the attitude."
I try to be funny. I try to keep up appearances, too. "Uh, Mom, we do have pictures of you when you were in high school. I seem to recall a troubled relationship with hair spray."
"I wonder if it's that...man."
My mother won't even speak his name. Mr. Mymer is now in the same league as Voldemort.

There's also a reference to Twilight in Bad Apple. Tola's sister is talking about her outlook on life, that it's bleak but "realistic" when she wonders if people expect her to be watching Twilight: "Let me tell you something, the pretty, sparkly vampires aren't coming to save us. We're not worthy. We're not special. We don't even smell good."

Just before each chapter in the book there is a section of comments recorded by the people in Tola's life as if they have been questioned by reporters. It ties in with what happens at the end, but they are my favourite part of the book. They're hilarious. One is written by Tola's jerk neighbour who keeps on her about her cat. Tola mentions that he's the only one in the world who doesn't even care about the controversy in her life; he just wants Tola's cat to stop leaving dead animals on his porch. So his comment has nothing to do with her supposed affair and he just goes on about her cat.

There's also this cool part in the book about banning books in school libraries. A concerned mother stands up at a school board meeting and mentions a book that has an apple on the cover that tells a story about a teacher having an affair with a student. And now it's happened in their school. She means Boy Toy by Barry Lyga (I'm pretty sure), which is a cool cameo. The librarian at this point exclaims loudly and stares the group down, then leaves the room in disgust. It's a good scene.

Bad Apple was very different than I thought it would be. I recommend reading it just for the scene where Tola finds out she can take a punch in the face. That whole scene with the school heartthrob/jock is the funniest in the book.

How I Decided to Read *Bad Apple*
Posted by Words Worth Blogs! at 8:05 PM

Hey Mandy! Wow, your review made me push this book right up to the top of my "to-be-read" list!

You've convinced me, I'm adding this to the TBR list. I LOVE funny books and sometimes it's really hard to find a good one. :)