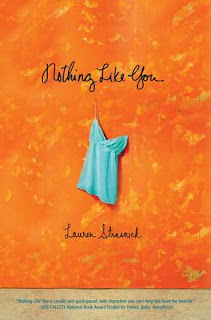 Wow, a hidden gem.
I knew absolutely nothing about Nothing Like You when I grabbed it off the shelf at work. Except the cover looked attractive and it happened to be slotted in my favourite place in the store. It was meant to be that I would pick it up and read it in a day!

Nothing Like You starts with a very compelling premise. Holly is starting her senior year. During the summer she had a fling with Paul Bennett, only the most popular guy in school. She's lost her virginity to him in the back of his car and assumes that it was a one time thing for both of them. Until Paul starts coming around again at the start of school. And Holly, like everyone else, knows that perfect Saskia is his long-term girlfriend.
You'd think this might be too straightforward as a story. I mean, secrets ALWAYS get found out in fiction! So you know going in what the natrual progression of events might be, but the actual experience of reading NLY was different. Usually, when you're reading a book you're NOT enjoying, you hover above the action thinking cynically, "I know where THIS is going." And then you nod smugly when it does go there. But while I was reading NLY, although I had a very strong sense of where things might end up, getting through it all seemed fresh and compelling. I was actually surprised when events unfolded even as I knew they might be around the corner. So kuddos to Lauren on craft.

Like for an example, I knew that Paul was probably going to end up being a jerk. Here he is accepting a strange girl's virginity in his car, cheating on his girlfriend, and coming back for more. But I was tricked by his character at the start; for a second--actually for quite a few pages--I thought Paul might be okay. Maybe he really did like Holly and is a good guy caught in a bad situation. But no. No no. Lauren was just able to write a character who could be a jerk and at the same time, even though you're seeing everything happening in slow motion, make you love him in the way Holly does. And it's funny, Holly isn't really being naive in the story. She's numb and has many and various bottled-up feelings about the death of her mother, but Paul makes her forget those things and feel something good--even for a little while. Her major problem begins when Saskia seeks out a friendship. And she turns out to be a way sweeter person than Holly imagined.
One of my favourite things in Nothing Like You is the relationship between Holly and her drama teacher Mr. Ballanoff. I was looking around for my favourite exchanges between them but they last for a whole chapter before you get the whole meaning of their connection. Ballanoff used to kind of date her mom and knows her family and he pushes her when it comes to class. But he's also very insightful and compassionate. He's probably my favourite character.

I also liked Nils, Holly's best friend. They are tomboy buddies, friends since they were ten or so. Nils has a problem with dating girls back to back and dumping them unglamorously. In this scene, he and Holly are drunk and talking about his relationships:

"Okay, so wait, so you go, 'I'm just not ready to be in a committed relationship,' and she was like, what? She said what, exactly??" I was cracking up. Hysterical. Not that Nils and Nora's breakup was even remotely funny. "And then she was, like, sad, Holly. She was sad! Stop laughing! It sucked. I don't like hurting people. Especially not her, she's sweet." He stuffed a handful of chocolate into his mouth. I swallowed and continued. "No, but seriously, you're right. It is sad. It's really sad." I tried twisting my lips into a frown. "What're you doing to your face right now?" "I'm frowning." Nils reached out and touched my mouth. "You're not frowning, Hols, you're, like, smiling but the sides of your lips are turned down."

Lauren is really good at writing dialogue and giving the sense of a real relationship between people through what they say. Plus there was all this unexpected humour in a lot of the book's scenes.

Another strength, just getting back to the character of Paul Bennett, is how well he was written. Seriously, if his character was too transparent the story would have fallen through. Lauren really knew this character, his MO, and even had me a little bit tricked, just as he had with Holly. And still, Paul came across not so much conscious of his actions, but really just acting out his true nature. He gave me chills.

So yeah, I really look forward to what Lauren will have to offer in her next book.

I love the elements of the book you highlighted -- my favorite kind of review!

Juju: Yeah, I like the cover too. It made me pick it up!

Donna: Thanks! I love when you can actually SEE the writer's process and WHY a novel is good, within the text. It's exciting.

I totally have this one on hold at the library already, but your review makes me want it like *tomorrow.*

Uh, I really want to read this one. It sounds so very good. Great review. :D