The Space Between by Don Aker 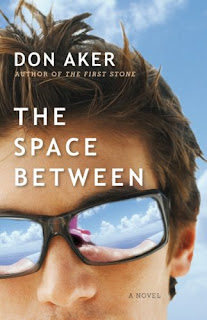 I think that Don Aker took one of those creative writing classes which teach you to open your book with a bang:

I’m going to Mexico to get laid.

And he does. Well, he has strong intentions. What soon-to-be-turning eighteen year-old Jace doesn’t know is that life has a way of churning up the best intentions, leaving him to sort through what’s left.
Jace loves his family but travelling with his mom, his lushy aunt, and autistic brother will make it near impossible for him to achieve his goal at the Mexican resort, the Mayan Empress. When his aunt rents him his own room at the resort, he can’t believe his luck. But the only person he seems to attract to his company is the jerk jock, Connor, who is travelling with his raucous team mates.

And that’s the plot in a nutshell. But it doesn’t touch Jace’s real story, the one that unfurls slowly and takes on more colour as Jace learns what it really means to become a man. The excellence to this book is in Jace’s voice. I could feel Don Aker channelling his teenage self through the character with a touch of his more objective, adult perspective. But only a touch. Aker threads the best use of dirty words and expletives I’ve read since King Dork. The Space Between rests somewhere in between the styles of Frank Portman and John Green, with a heavier Green leaning. If you read this book just to experience the world through Jace, it will have been well worth the read.

That said, I have a few problems with the plot turns. There’s nothing outrageous that happens (which I tend to hate; *spoiler* like for example Renee being the killer in True Blood season one—what a betrayal of an awesome character and also a stupid narrative decision even if it is supported by the book), but some of the events seemed harried or two-dimensional. Or see-through; please find genuine ways of getting the character from point A to point B, emotionally. And for the most part, Aker does, I mean I read this book like a crazywoman up at 7:00 a.m. just to get a good 150 pages in before work.
I wish I could quote some of the awesome use of bad words and their combinations from the book but I assume that I’m in polite company! You won’t necessarily bust a gut, but you’ll yell HA! (one of my own many ways of laughing) and attempt to Aker-ize your everyday conversation. Be warned!

Previously:
Teaser Tuesday of The Space Between
Posted by Words Worth Blogs! at 4:11 PM