Guest Blog! Maria V. Snyder Author of *Inside Out*!

Inside Out by Maria V. Snyder is going to be published in April, and I can't even wait! Maria is the popular author of the Study series, starting with Poison Study, and the Glass Books, starting with Storm Glass. Inside Out looks amazing, dark and dystopian. Maria has generously written a guest blog spot on the setting of Trella's world in the book, so read on!
TRELLA'S WORLD TURNED INSIDE OUT 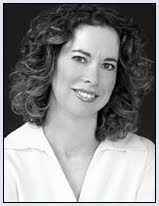 Trella's world came to me in a dream. I've never dreamt a complete novel before, and I haven't since. But the world of Inside popped fully formed into my head on night. It's a metal world with four levels of habitation. The bottom two levels are home to the scrubs. The scrubs keep the world clean and the equipment maintained. Their levels are overcrowded, they sleep in bunk beds, and they have no say in how their world is governed. Scrubs are not allowed to have advanced technology or weapons.

The upper two levels house the uppers. They are in charge of running the equipment, policing the world and making all the decisions. Uppers and scrubs are kept separate. The only people who go between the two societies are the Population Control Police (a.k.a the Pop Cops) and Trella (she's not supposed to, but it's boring in the lower levels). The Pop Cops keep a close eye on the scrubs, encouraging th em to have children and making sure they follow all the rules. Scrub children are raised in care facilities, while the uppers have families and live in spacious apartments.

Since the world is completely contained, there is a limited variety of everything. Vegetables are grown in hydroponics, all waste is used to fertilize the plants and the grass for the sheep. Mutton is the only meat and the water and air are all recycled. In fact, everything is recycled - including people. When a person dies, they are fed to Chomper and become fertilizer. Glass is a popular material as it can be reused and recycled endlessly. Wipe boards and computers are used instead of paper and scrubs don't own many personal items due to lack of space and material. Trella has two items she treasures.

The world is dystopian if you are unfortunately born a scrub. One of many with nothing to look forward to but endless hours cleaning airshafts and water pipes. In order to escape the overcrowded conditions, Trella prefers to stay in the air shafts and avoid everyone. Because of her explorations of the pipes, she knows every inch of Inside. And for a scrub, knowledge is very dangerous.

Trella's world is unbalanced and is about to be turned Inside Out!

To read the first chapter of INSIDE OUT click here.
Maria's Website.
Thank you so much, Maria!
Posted by Words Worth Blogs! at 4:53 PM

I love the Poison Study books! I can't wait to read her first YA novel - I'm sure it will be amazing! I hoping to go see Maria in Michigan soon as well - so excited! :)

This is my most anticipated book of next year! I can't wait for release day, and I'm off to read the first chapter now, hurrah!

Very cool. I enjoyed Poison Study thoroughly, so I'll keep an eye out for this one. Sounds pretty dystopian to me, though... ;)

How are you feeling? where to buy clomid buy clomid uk
clomid buy online no prescription I hope we'll meet again.

May I ask you a question?
buy zithromax http://www.playlist.com/blog/entry/12529890051 buy zithromax Come back soon.

I like a little bit of romance in the books i read. If there is romance in both which one should i buy?