I really hope this has something to do with the story... 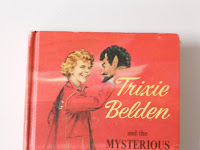 Working at a bookstore, it's great fun to see the books that people special order. Often they are bestsellers from years back; sometimes they are obscure or hard to find titles; and, occasionally, they are kids titles that make me nostalgic.

And, every once in a while, they have terrifying covers like the one to the right.

I've never read any Trixie Belden books, but I think if I owned this one as a kid, I would have hidden it in the attic. Why is Trixie wearing a severed head on her hand like a puppet? I always suspected Nancy Drew had a bit of a dark side, but Trixie, you're, like, twelve years old! In all seriousness though, I probably would have read the book just to figure out what the heck was going on. I am always fascinated by book cover art. I'm particularily interested in the differences between the US/Canadian/UK versions of books. Or when a book wins a medal and they change the cover to supposedly appeal to the masses. Case in point: Shannon Hale books. The original cover (illustrated one) for Princess Academy is so much more representative of the story,  in my opinion. What do you think?

-Erica
Posted by Words Worth Blogs! at 1:18 PM No comments:

Back in the late 80s, a friend lent me her copy of a yet-unheard-of-by-me teen magazine called Sassy. As I flipped through it's glossy, colourful pages I could almost feel my 13-year-old mind collapsing under the weight of all of my subverted expectation.

Sassy, for those who've never read it (and it's long defunct), was like a big, bad, sarcastic older sister to all the other goody-goody teen mags (Seventeen, I'm looking at you). Sassy introduced me to bands and musicians  like Sonic Youth, Dinosaur Jr., Juliana Hatfield, and Liz Phair, and frequently published candid articles about sex, drugs, and rock 'n' roll.

But the very thing that made Sassy so great, eventually led to the magazine's demise. A group of angry mothers killed Sassy. Not happy with the magazine's content ("How dare you try and inspire our daughters to be independent-minded, informed young women!"), the mothers started an advertising boycott. They wrote to all of Sassy's major advertising clients and asked them to boycott the publication. And, as you can imagine, it didn't take long for things to go south.

Sassy folded in 1996, and, since then, my heart has longed for another magazine to come along and fill it's stylish combat boots. Bust has been a worthy seatwarmer for a few years now, but it's more of a young women's (20+) Sassy and lacks some of the tongue-in-cheek charm of it's predecessor, though it definitely is a topnotch magazine.

Anyway, let's skip to the happy ending. Through a recent article in Bust magazine, I discovered that 16-year -old fashion blogger Tavi Gevinson, with the help of a few others including Jane Pratt (!) and Ira Glass (!), have created an online magazine called Rookie that effectively blows my mind. It's everything Sassy was and more. Tavi, thanks for loving Sassy even though you were not born before the last issue rolled. You have made my world a better place.

And...just to send me right over the edge of happiness, Rookie has a book coming out this fall. It's a collection of the best of the magazine's first year.

-Erica
Posted by Words Worth Blogs! at 1:11 PM No comments: