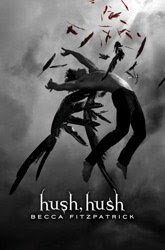 Becca Fitzpatrick will probably get tired of her book being compared to Twilight, especially when it’s released in October, but Hush Hush does have a few things in common with that YA behemoth. Namely, you WILL have to read Hush Hush in one or two sitings and you WILL fall in love with Patch. Or fall in lust with him, which is what he would maybe prefer.

I’m not giving away anything when I mention that Patch is an angel. The cover is unequivocal; the man has his wings all pulled out and he looks like he’s FALLING *hinthint*. Hush Hush gives us a whole new paranormal mythos, oustide of the super-popular vampire theme that is everywhere in books and on t.v. Vampires are awesome, but it’s great to see something new. And Becca doesn’t overwhelm us with too much angel lore or angel-fiction-rules; she let’s the narrative take care of itself, weaving in some traditional and some made-up (I think) laws of angels. But, like Buffy the Vampire Slayer, I never felt bogged down in too much angel background—the info given is plot-centered and necessary for the character. But, where Edward was more like Angel, Patch is more like Spike.

He’s lusty and pushy and way too confident. But not tormented, or at least he doesn’t externalize his torment and revel in it. Patch is not Emo. Yet I haven’t had a crush on a literary man since Owen from Sarah Dessen’s Just Listen, or the Weasley Twins (yes, BOTH of them!), and Patch fits the bill. There is something deliciously mischevious about Patch that will attract a lot of girl attention once it’s published.

And I mentioned before about the best friend character Vee Sky; she absolutely infuses the book with hilarity and gives Nora some very bad ideas, such as playing spy girl (there is a ridiculous disguise scene that is pretty silly). My previous concern was that Vee might be punished by some gory serial killer ending for being the sexually precocious one, but I was satisfied with her story and look forward to her return in book two (I hear that Becca is writing the sequel now).

My only qualms remain the question of Patch's name (there is an explanation in the book, but it's hard to connect it with his character. Worst, I guess, his name could have been something like Thorn Daggerhilt—actually maybe it IS his real name, as Patch is a nickname. Book two, maybe, we'll learn his true name). And there is a bit of abruptness on the last page, which I can't really get into with my virtually spoiler-free review. But Becca has written a solid romance-action-adventure with memorable characters and tons of sexy tension. Fans of Twilight and Libba Bray's Gemma Doyle series will love it.

As a final thought, when I finished Hush Hush I still couldn't figure out the title. My guess is that hushing refers to the pushed in spot on your top lip; apparently, if I have my angel myths right, it is the evidence of an angel putting his finger there when we're born. I can't remember why, though. To quiet us after we've seen them?

Oh, and my favourite part?

"I was standing in the lower level of Bo`s Arcade with my back to the wall, facing several games of pool...Stevie Nicks was coming through the speakers; the song about the white-winged dove and being on the edge of seventeen"

Of Ongoing Note:
Genesis by Bernard Beckett book giveaway and interview!
Posted by Words Worth Blogs! at 6:39 AM

Holy cow, Mandy! What a fantastic review! Thank you :)

I'm going to stick this one under the reviews section on my website...

Hey, thanks! Really, thanks for checking out my blog. I don't know if you'll be back this way (to see this comment), but closer to September could I have a little e-mail interview with you about your book for the blog and our newsletter?

Actually there is no angel myth about angels placing there finger on your top lip when you are born. It'd just a line from the movie The prophecy that Walken (i believe) uses. That is where you heard that from ;)

can't wait to rad this one! It sounds amazing!