The Wand in the Word edited by Leonard S. Marcus 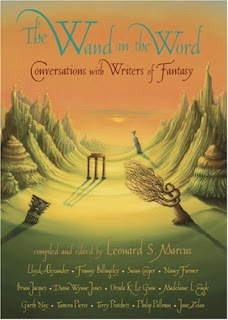 On Friday there was a package on my “desk” at work waiting for me. I love this part of the job. Inside was a book sent specifically for me with a note saying, “Hi Mandy, The first of many. Cheers”. And the book inside is what I have spent an entire delightfully thunderstormy day reading: The Wand in the Word: Conversations with Writers of Fantasy.
I vaguely remember requesting a copy of this book a while back and love that it came unexpected and with the deliciously hopeful promise of many more to come. I think I know who sent it to me and I’ll e-mail them thanks, but for now I just want to review this beauty.
First, it’s gorgeous and heavy. Slightly wider than a trade paperback, this hardcover is a piece of work. And it’s no wonder, Candlewick being the publisher. They put together very beautiful, wonderful books for kids. I actually swoop down on their catalogues when we get them at the store, like a harpy stealing each morsel from the mouths of my co-workers. They’ve gotten used to it.
The Wand in the Word is a collection of interviews between Leonard S. Marcus and 13 writers of fantasy. Marcus has a huge resume as a children’s literature critic and historian. His 13 interviews include those with Lloyd Alexander, Franny Billingsley, Susan Cooper, Nancy Farmer, Brian Jacques (pronounced JAKES I’ve learned), Diana Wynne Jones, Ursula K. Le Guin, Madeleine L’Engle, Garth Nix, Tamora Pierce, Terry Pratchett, Philip Pullman and Jane Yolen.
Marcus focuses on questions about the authors’ childhoods; what type of readers they were, important people in their writing development, how they finally chose the life of a writer and how they got there. His book reprints some great photos, such as the one of Lloyd Alexander in his uniform during WWII, looking a little uncertain. Or the one of Tamora Pierce when she’s 10 wearing horn-rim glasses. And he includes, for each author, a reprint of an original drafted page from one of their books, with the author’s corrections and re-writes.
My favourite interview is with Philip Pullman who made me laugh a lot. When asked if he knew what his own daemon would be, he responds: “I suppose I think of her as a bird, probably one of those dull, drab-looking birds, like a jackdaw, which makes a habit of stealing bright things. She hangs around inconspicuously listening for little bright snippets of conversation or an anecdote and then picks them up when nobody’s looking and brings them back to me, and we make a story out of them”. He also has a great story about having dinner with Tolkien and a few of his friends. None of the boys liked learning Anglo-Saxon (Tolkien had fought to keep it in the school) and none had read Lord of the Rings yet either, two subjects that Tolkien brought up right away.
My other favourite interview was with Jane Yolen who has some great stories about her family, namely her father, supposedly the world’s best kite-flyer, and her cool aunt. Jane Yolen has a quirky way of responding and I loved just hearing her voice.
The Wand in the Word is a good little collection of interviews from great writers. I confess to not really knowing who Franny Billingsley is but I’m going to check out her books. Actually, my only qualm about this book is that my to-be-read pile has just shot through the roof!
The paperback is out in October of this year with more plebeian pricing. I suspect the hardcover is intended for library and academic use. But it was definitely worth the read and was kind of perfect on a rainy Sunday.

This one looks awesome!

Sheila: It really really is. I really enjoyed it. :)