Interview with the illustrious *Shannon Hale* on *Forest Born*

Goose Girl was my introduction to Shannon Hale's writing. Then came Princess Academy, Book of a Thousand Days, and I was hooked. And now Forest Born, which I connected with in a way unlike Shannon's previous books. Rin, who you just want to hug, is Razo's younger sister. Knowing Shannon's writing, I was on the lookout for Rin's secret power from the start. Obviously, from the title, there would be a connection to trees. But Rin's power, the st 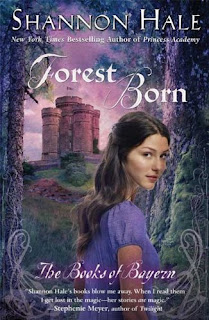 rength of her character, turns out to be much more complicated. Rin's development through Forest Born is so remarkable and satisfying, I felt she had a harder time coming into her own than her Bayern predecessors. Forest Born is a darker Bayern book, but I think, my favourite so far.

Forest Born, like really anything else written by Shannon, is supremely quotable; you just want to type out the entire book because of the power and insight written there. Actually, I wrote a good chunk of lines into my personal journal because they were so "right". Here's one of my favourite passages, near the beginning:
Rin learned to crawl on moss and walk on pine needles, and by the age of four she could climb a fir as easily as fall into bed. That was thanks to Razo, who never had worked up a reason to push his little sister. When Rin was not clinging to her ma, she was running after her brother. She talked some and laughed some, but mostly she watched--the faces of her brothers, the sway of the trees. She watched the world the way most people breathed air.
"That girl sees the bones inside birds," her ma would say.
"That girl can see your soul."
I had so many questions after reading Forest Born that I needed to see if Shannon would mind answering some of them! I also asked her a few things about her book cover design and her relationship to the internet as an author, out of the feedback I've received through comments on this blog. Thanks so much, Shannon! 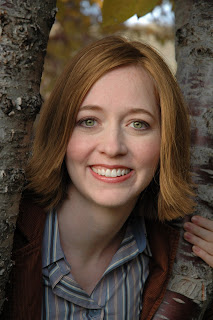 ***
Rin is deeply introverted. She lacks confidence and seems to have life only in relationship to the people around her. What sense of Rin’s character did you have when you started writing Forest Born? How did she come to you? What about her story needed telling?
Rin's character, like most of my characters, evolved during the process of writing. Where she began was not where she ended up. Writing is exploration for me. But I was drawn to this girl that seemed broken and afraid of herself, though I didn't know why at first. I wanted to know why, and I wanted to see her understand that and figure out how to live despite her fear. I think it's important to have many different kinds of characters in literature, so we can all find ourselves in stories, as well as grow to understand others. Rin was unique, and I wanted to give her a voice.

By the fourth Book of Bayern, you have quite a cast of characters with fully formed backgrounds in Forest Born. Was it difficult telling the full story of Rin while also giving a sense of continuity for the other characters? Especially since most of their voices are so much louder than introspective Rin’s? What was left that needed telling?
I rewrote this book A LOT. I cut at least a book's worth of material from it. Part of the cutting was all the scenes I wrote for the other characters. I know them all so well, it's fun to write their voices, but in the end, this is Rin's story, and I needed to keep focused on her.

I really really loved the darkness in Rin in the beginning, the mystery of her character. I didn’t have a full handle on her at the start of the book and it took the entire story for me to figure out what was causing the disconnection in her life. The scene where Rin is hiding in the tree with Razo and Tusken is vivid in my mind. Rin needs to be very quiet but her silence brings up every dark thing inside her. This whole scene, for me, had a meditative feel. Is that what Rin needed to do? Just sit with her feelings and let them be?
Rin's story was tricky because for the first half of the book, she ignores--buries--what is haunting her, because at the beginning she isn't capable of understanding it. Only when she's learned enough to understand what she did can she look at it again with new eyes. I think we all do this sometimes, believe one thing, then look back at it later with a new understanding. Rin is plagued with two powers--one is aggressive, and one is passive, and she needs to find a balance of both. Listening and speaking. Acting and resisting. It's an internal struggle, more than anything else I've written. Internal struggles are TOUGH to write! It took me a long time to figure out how to do it, what it meant, and why it was important.

Do you have a say in the cover art for your books? How is it to see your writing come in a package? Do you prefer any cover art in particular from the various designs your books have taken on, paperback versus hardcover, newer versus older printings?
The publisher is in control of the covers. They are kind and consult with me most of the time, but ultimately it's up to them. I'd had a hope that we could have an Alison Jay cover for the hardcover of Forest Born to match the other hardcover Bayern books. I do love the Forest Born cover, but I'm fond of the older covers as well. I wish we could have both!

How does the internet affect your relationship with your fans? How does the internet help or hinder you as an author?
Well, it takes time, for sure. Time away from writing. So I have to be careful with the limited time I have (I have two little kids). But it's also so wonderful! Since I can't travel and do as many events as I'd like (those kids, again), having a website and blog allows me to communicate with my fans still and hear from them too. I also love being a help to aspiring writers and try to keep my website and blog full of lots of writing stuff for their sake.
Also, check out the letter from Shannon to her reader on why she wrote another Bayern book (I was so excited to see that Shannon has this re-printed on her website. I LOVED reading it in the advanced reading copy. It was a special extra that was very cool).
And, read the first chapter of Forest Born here.
Pretty much just go to Shannon's website for great extras, like deleted scenes and lost chapters.
Forest Born is available now!
Mandy
Posted by Words Worth Blogs! at 6:12 AM

Thank you for the great interview! :)
I used to love Shannon Hale when I was younger, and I'll definitely have to check this one out! I didn't even know it came out, but I'm definitely looking forward to finding more about Rin.

Jenn: Very cool. Thanks for stopping by! Book of a Thousand Days by Shannon Hale also has the gravity of Forest Born for older readers who loved SH when they were younger. :)

How have I missed reading anything by Shannon Hale? I don't understand it. I will love it when I start her books, I know. I was planning on starting with Book of a Thousand Days, I think. Should I start with that one?

Wonderful interview! I stopped reading the Bayern series after Enna Burning, but I've definitely enjoyed all of Hale's writing. I'll have to get back into it. Great post!

Nice interview. I totally need to read some of Hale's stuff.