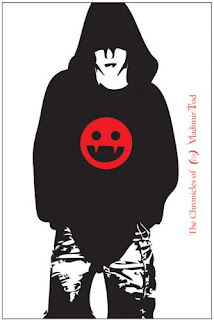 I think I may begin reading The Chronicles of Vladimir Tod now that Angus, Thongs and Full-Frontal Snogging is wrapping up. It just looks cool. And I found this on YouTube:

Book 1 in The Chronicles of Vladimir Tod, by Heather Brewer, available everywhere on August 17, 2007!
I was hired by author Heather Brewer to create a Flash movie trailer for this novel. LOVED working on it. :) written by the creator of this trailer

It looks like Heather Brewer is up to 4 books in the series. I've heard a lot of great praise for this book and I'm pretty eager to get started on it. Despite a mountain of books to read! And it's no fair to them because I just bought Tod last week! He should be at the end of the line. Awesome cover art gets you bumped up the list.

Mandy
Posted by Words Worth Blogs! at 5:47 PM

Juju: Yeah, I thought it was pretty cool too. It's neat that the author asked this lady to make it for her.