I read A Drowned Maiden's Hair last year sometime and I don't think it's getting the attention it deserves. It's available in paperback now (bottom), although I prefer the hardcover artwork (top). I love the title font and how it's set against a starry sky. The scene on the front which shows Maud exactly how I picture her when I read the book (rare!) and a ghostly looking girl in the background, set against a night-time tide coming in. This scene is directly from the book and gives you a sense of the mood of the story. 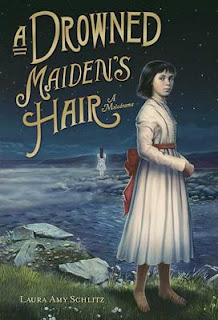 Maud lives...no wait, actually I want to start this review by reprinting Laura Amy Schlitz's inspiration for this book, taken from the back sleeve bio:
Maud first appeared to me when I was halfway between sleep and waking. From the first, she was alive to me--I saw her vividly--but I didn't know how to begin her story until I remembered the outhouse of the Quaker meetinghouse I went to as a child. That outhouse was a terrible place--to be resorted to only in the direst emergency. Once I'd imprisoned Maud in the outhouse, her story began.
The story opens with Maud locked in the outhouse of her orphanage as a punishment. She makes the best of it, sitting in the dark and singing. You also find out it's the best day of her life.
Three older sisters, Hyacinth, Judith and Victoria, women of independent means, will come to adopt Maud that day, wisking her away from the Barbary Asylum for Female Orphans. The life they give her, however, is a mystery to Maud. 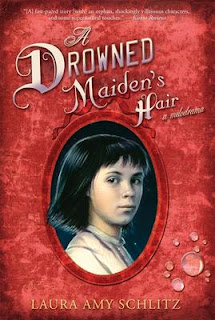 At first the four females live in a grand house with beautiful furnishings and clothing. Hyacinth in particular seems like a warm mother-figure to Maud, and she thinks she's the luckiest girl in the world. But the sisters have asked Maud to hide in their house, not let anyone know she lives with them. She becomes more kept than loved, even though Hyacinth seems sincere. And then, one night, Hyacinth and Judith sneak her out of the house and through the town to Hawthorne Grove, their place by the beach, which I seem to remember as a kind of summering cottage. There Maud learns the tricks of the family buisness and finds out exactly what the three sisters were doing adopting a young girl.
The book is set in 1909 and the gothic tone is realized so well. The setting is vibrant and lush; it's the part I remember the most about this book, the beach and the boardwalk. The plot is involved with the beginnings of the Spiritualist movement, when it was the in thing to go to Seances and spirit-raising gatherings. There was also a lot of money and prestige for anyone who could orchestrate this entertainment. Man, I want to re-read this book sometime soon.
Ooh, the author has worked as a playwright. That makes sense. The story has this stagey feel to it, plot-wise and tone-wise. It makes you feel, while reading, that the curtain can be pulled aside. A Drowned Maiden's Hair has a heady atmosphere, for sure.
And recently I received a copy of Laura Schlitz's new book, The Night Fairy, which is coming out in February. It's a short story, about a hundred pages or so, and the published edition will have illustrations throughout. Although my little galley copy has NO illustrations. So sad.
Mandy
Posted by Words Worth Blogs! at 10:18 AM

You beat me to it! I'm posting my review of this one tomorrow. Thoroughly enjoyed! I too loved the setting and the atmosphere -- so well done. Schlitz is on my list of authors to keep an eye out for.

So adding it to my TBR list. It looks awesome.

This book actually does sound really good - I'll have to check it out.

Sounds very interesting and i like the covers, so beautiful.

Hello !.
might , probably very interested to know how one can make real money .
There is no need to invest much at first. You may start to get income with as small sum of money as 20-100 dollars.

AimTrust is what you need
The company incorporates an offshore structure with advanced asset management technologies in production and delivery of pipes for oil and gas.

It is based in Panama with structures around the world.
Do you want to become an affluent person?
That`s your choice That`s what you really need!

I feel good, I began to get income with the help of this company,
and I invite you to do the same. If it gets down to select a correct companion who uses your funds in a right way - that`s AimTrust!.
I earn US$2,000 per day, and what I started with was a funny sum of 500 bucks!
It`s easy to get involved , just click this link http://domileju.freewebsitehosting.com/cabybe.html
and go! Let`s take our chance together to feel the smell of real money

Good day !.
might , perhaps curious to know how one can make real money .
There is no need to invest much at first. You may begin to get income with as small sum of money as 20-100 dollars.

AimTrust is what you thought of all the time
The firm represents an offshore structure with advanced asset management technologies in production and delivery of pipes for oil and gas.

It is based in Panama with offices around the world.
Do you want to become an affluent person?
That`s your choice That`s what you desire!

I`m happy and lucky, I began to take up real money with the help of this company,
and I invite you to do the same. If it gets down to choose a proper partner utilizes your money in a right way - that`s it!.
I earn US$2,000 per day, and what I started with was a funny sum of 500 bucks!
It`s easy to get involved , just click this link http://iramugoquv.lookseekpages.com/ydopit.html
and go! Let`s take our chance together to become rich 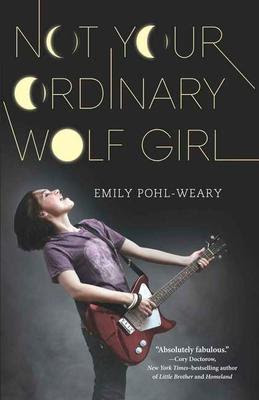