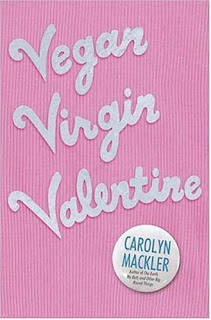 After reading Tangled by Carolyn, I know that she is a GOOD writer. She's very good at it, in fact. And I was in the mood for more of her crafting. And I found a hardcover of Vegan Virgin Valentine at a used bookstore. AND its pink and sparkly. So I felt ready for another of her books.

Mara is in her final year at highschool. She's an intense overachiever. She's already been accepted to Yale, she'll start College in second year, and she's a nose ahead of her lecherous ex-boyfriend for Valedictorian. For every move in Mara's life she and her parents have meticulously planned the details. The worst part is that Mara has no idea that she's "repressed".

Or that's what V calls it. V, Vivienne Vail Valentine, is Mara's niece, although they're the same age. V is the daughter of Mara's flaky sister, Aimee, who arranges her life around guys, travelling from one lifestyle to the next:

My parents had me when they were in their forties. Now they're in their early sixties, which makes them ten or fifteen years older than most people's parents. Not that they show their age, aside from the fact that they geerally go to bed around sunset. We NEVER talk about sex, so I don't know the specifics of my eleventh-hour conception. But I'm convinced that my parents brought me into this world to compensate for my older sister, Aimee, who was eighteen and skidding down a road to nowhere. 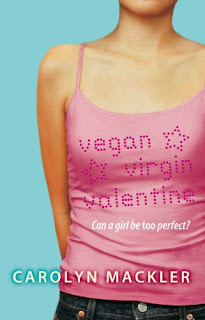 Mara and V don't get along at all, even though V and Aimee stay with her family in between their travelling around. V is an "in-your-face" girl, who shows up to her first day at Mara's school in a tight tank top that says "I just cain't say no!" and makes out with her ex-boyfriend Travis. When Aimee moves to Costa Rica to persue her dream of learning how to make Central American cuisine, it looks like V is there to stay permanently.

While the story starts out with V acting out and really not fitting in at school or at home, the book is really about Mara and her breaking away. Seriously, she's almost 18 and she and her parents have one of those family cell phone plans so her dad can phone her all the time, and she thinks there's no problem with that! When V begins to call her on these types of things, at first Mara is angry and offended, but then she sees that V may be on to something.

Some of my favourite scenes are Mara's college drama class, taken with academic goals in mind, of course. Her teacher, Dr. Hendrick, keeps harassing Mara about her lack of dance rhythm in class. He's kind of self-important and keeps making the group do wacky improv scenarios, which are hilarious:

Twenty minutes into class, Dr. Hendrick instructed us to divide into groups of four and create a nature scene--one person as earth, one as wind, one as water, and one as fire. I was so paralyzed by the extreme cheesiness of the exercise that I didn't look around for three other people. And then, before I knew it, the class was all quadrupled up.

Dr. Hendrick sashayed behind me, rested his sweaty paws on my shoulders, and steered me toward the nearest group of four. "I hope you don't mind adopting Ms. Valentine," he said to them. "But all the elements are taken," a college girl whined. I think her name is Rhonda. Her tags are always sticking out of her T-shirts. I've had a bad feeling about her from the first day.

Mara also works at a coffee shop called Common Grounds, as a way to round-out her college resume. She doesn't want to look like a closeted nerd with no real world experience. She secretly pines for her boss, 22 year old James, who lives his life with a different definition of success. Mara is so inexperienced with guys, and wary because Travis was pushy with her, and it makes her so funny when she's around James:

"Guys can be such jerks sometimes," James said.
"Not all of them. Not you."
"Do you know that I would never push you to do anything you didn't want to do?" "I know."
"Good."

I have to admit I was relieved to hear that because, as we were discussing exes, I couldn't stop thinking about the fact that James is twenty-two. And I have a feeling that by the time people are in their twenties, they're not exactly walking in slow numerical order around the bases.

My one qualm about the story is the neat ending for Mara and Claudia. Sometimes friendships are strained too far and can't snap back. This is especially true, I found, in highschool. It would have been okay with me to show this type of very natural loose end in the book. I found that in Tangled, a loose end was left with Skye's character--you don't get to know exactly how she's doing by the last page--and I like this type of ambiguity. Although I guess Mara and Travis will never really see eye-to-eye; their whole competition for valedictorian, fueled by all of the emotions built up between them, makes for some hilarious moments in the book!

Also, I like what Carolyn has to say about the origin of her book from the back cover:

Mara Valentine first came to me in a short story. I loved how she was so rigid, but at the same time hungering to break out. And V goes back about ten years, when I met these two girls in South Dakota who were aunt and niece. They've always stuck with me. Imagine how wild it would be to have an aunt and niece the same age! What if they were total opposites? I knew that V was exactly what Mara needed to shake up the status quo.

Aw, and not to load you down with too much bolding but this is too sweet:

In the middle of writing Vegan Virgin Valentine, I married my husband. Jonas and my falling-in-love story is not dissimilar to Mara’s saga with James, the owner of Common Grounds. When I first met Jonas, I labeled him “friend material.” He didn’t fit into the category of guys I usually dated – for one, I was taller than him. And for two, it just seemed so easy to get along with him. Aren’t relationships supposed to involved lots of angst and tear-filled tissues? But I, like Mara, ultimately learned that love does not fit neatly into a category. And sometimes you have to leave your comfort zone to find something wonderful. Oh! And another similarity I have with Mara – I’m a devout vegetarian. But a title like Vegetarian Virgin Valentine didn’t have quite the same ring to it! (From Carolyn Mackler's website)

It's very cool when an author has a "Behind the Book" section on their website.

I got to hear her speak a few years ago in NY and she was awesome and I still haven't gotten around to her books yet, but this just reminded me that I should, thanks!!

Awesome review! I haven't read this one yet, but it looks like a really good read. I love how you included quotes from the book :)

This sounds like a great book--I'll have to check it out! Thanks for the great review :)

It's been a while since I read VVV, but it was really good. Great review.

I literally walked over to the shelf in the library and it was there and is now coming home with me. I also loved "Tangled" and your review made this book sound even better!