Review *Getting Revenge on Lauren Wood* by Eileen Cook 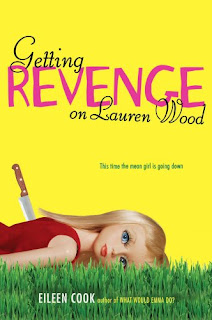 I read Getting Revenge on Lauren Wood at a frantic pace. I loved it and I see that Eileen Cook has other books. I feel a backlist marathon coming on.

First, I was absolutely drawn in by the cover. It's the single most coolest Teen cover I have seen in awhile. It stuck in my mind when I was perusing YA 2010 lists and as soon as I got my hands on a copy it rushed to the top of my gotta read 'em list. I found out on Eileen's website that the doll was custom made because legally you can't used knifed Barbies to market your wares. Who knew? Here's a cool response from Eileen on how the cover came together:

When they asked me what I had in mind for Getting Revenge on Lauren Wood I thought of a scene in the book where the main character tosses a Barbie doll dressed in a cheerleader outfit into a wood chipper. The brilliant designer, Cara, pointed out that Mattel doesn’t take kindly to people chucking their trademarked doll into a wood chipper on the cover of books. Now, personally I think Mattel owes me as I’ve bought more than my fair share of Barbies over the years. I was never a baby doll kind of person, however I had a herd of Barbies. I created elaborate lives for them and even did sort of a Project Runway kind of thing where I made clothes out of scraps of fabric. Still it was a no-go on any Barbie destruction.

Cara found a place to order a custom made doll. We could do whatever we wanted. GENIUS! The doll arrived with lace panties on. Sort of makes you wonder who the typical buyer is for this product. They wasted no time in setting up a photo shoot for the doll. Cara selected cover colors and font for the title. The finished product can be seen to the left. I love it! It captures what I wanted, the revenge aspects, that the story is funny, the artificial “fake” aspect of some friendships.

Now I just hope the average person in the bookstore likes it as much as I do! (Eileen's website)

*Waves hand frantically and shamelessly in class like Brenda* I Do!

And I was not disappointed with the story. Helen Worthington and Lauren Wood are *Best Friends*. They are just about to enter highschool, a time when, Lauren believes, you can have a do-over, a clean slate. Helen is a bit of a puppy dog and lets Lauren run the show. In the book Helen is described as the diplomat and Lauren is the drama queen. Helen always thought that Lauren was just more sensitive than most people and needed to be handled with kid gloves, but she realizes later, after "the incident", that Lauren manipulates every situation to get what she wants.

Before they start highschool neither girl is particualrly popular, and Lauren seems the most worried about this. So it comes as no surprise to the reader when she sets Helen up for a very public humiliation, something that she can't live down, which also pushes Lauren to the top of the food chain. Thankfully Helen's family move away and she never has to see Lauren again. Except for Helen's obsessive Facebook stalking of her ex-best friend that lasts 3 years and her vow for revenge. When Helen decides to move back and finish off the last year of highschool in her old town, she is unrecognisable. All of her attention is focused on cracking the popularity code and getting revenge on Lauren Wood.

It took me until Helen changed her name to Claire Dantes, but I think I actually yelled out, "Ohmigod it's The Count of Monte Cristo!!" which is one of my favourite books. Edmond Dantes is the consummate avenger, imprisoned unfairly for years because of his best friend. So I was very impressed with this reference. And Getting Revenge... was a bit Pygmalion, too. When "Claire" gets to school she's stuck with Brenda, official school buddy for new kids. She's the opposite of a Lauren Wood and Claire feels like she could balance out her revenge karmically by taking Brenda under her wing. As long as the popular girls don't notice, which would blow Claire's undercover act. So Brenda is made over and even plays a role in Lauren's downfall:

"Look, popularity is a science. It's not as shallow as it looks."
"Really?" Brenda crossed her arms.
"Popularity is a mathematical formula based on desirability criteria. High schools are a classic anthropological case study, and getting people to respond in the way you want is psychology. All science. It's just not the type of science you're used to."

Claire/Helen is basically a good person. She just wonders whether people who are horrible ever get theirs. What if karma accidentally overlooks giving out dues to the deserving. Claire wants to make sure that Lauren pays for what she's done. And as she gets closer to Lauren's inner circle she sees that she's not the only one who feels that L could be knocked down a peg or two.
I really liked how not outrageous Claire's schemes are. Orchestrating L's break-up with her boyfriend seems like cake, until she realizes that maybe L isn't that broken up about it. As Claire moves her pieces into place I actually cheered for her. Maybe I am not as evolved as Brenda is, but Claire is seeing to it that Lauren is put in exactly the same situation she put Helen into. And I got behind her motivations. Getting revenge on Lauren Wood takes over Claire's life and she realizes that even the best laid plans never turn out the way you thought they would.

The writing is tight and I loved all the characters. Except for Christopher who I thought was a little righteous. But Lauren's cronies are really well written and hilarious:

Bailey saw me first and waved like she was a plush Disney creature at the doorway to the Magic Kingdom and I was a guest from the Make-A-Wish Foundation. If they could bottle what Bailey had it would be better than Prozac. You usually didn't find people this happy unless there was serious medication support.

I found Claire a very strong character. Even if her plans are pretty crazy. She's so focused on Lauren but she doesn't see how that energy has actually been channeled into cracking the popularity code. She becomes very insightful into the nature of pack mentality, although she's using it for less than good ends. Just like Edmond Dantes, Claire doesn't know who she would be without her revenge gig and just can't pull back. She becomes a courageous, sexy, popular girl which would probably be the revenge she needs in itself, but Claire just can't help herself. She needs to see Lauren crushed:

I'd checked off established popularity on my to-do list. Now it was time to move to stage two: active destruction.

Eileen is also a fellow Canadian. View her blog here.

And since I liked it so much I'd love to give away a copy for you to enjoy! I have a finished hardcover copy of Getting Revenge on Lauren Wood here to give away! Simply fill out the form below and tell someone about this giveaway via your blog, facebook, twitter, word of mouth!

It's funny, but the cover of this book, that you loved, REALLY turned me off. It's hard to say why.
But reading your review, I think I'm going to LOVE it!
The Counte of Monte Cristo is also one of my favorite books!

I think I saw this book sometime this week and I was completely drawn in by the cover as well. I am glad you liked it so much. I can't wait to read it for myself!

I LOVE this cover. Seriously, I can see why you were hooked. And it's great that the inside lived up to the outside!

Thanks for the contest!

When you said that you liked it so much, i believe that i would too :)
count me in.

i tweet'd this (forgot to put the url on the form. sorry!) : http://twitter.com/becunique