*A Book By Its Cover* 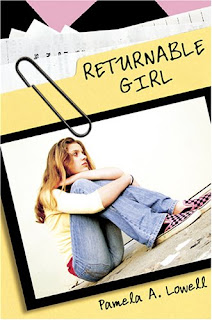 So sometimes I like to grab books randomly and, judging only by what I see on the cover, try to guess the premise of a book. Then I'll read the back and see how close I am. It's an interesting pratice. I'll try a few now:

(***Warning: what you are about to read is probably not anywhere near the real premise of the books you are viewing. They will in actuality most likely be way off-base***)

Okay so the girl looks pretty despondant. I'm thinking her parents have divorced. She's a daddy's girl and she now has to live with her mother. Beside a patch of cement. What about the file and paperclip?...My alternate theory is that it's about a girl who was adopted and then sent back. Which would probably be too horrible, even for a teen book :) Although you never know. It would fit with the title. MAYBE the file has to do with this girl's psychiatric visits. Because she was adopted and then sent back. Maybe more than once--again, just working the title in.

What Returnable Girl is REALLY about:

Dumped by her druggie mom, Veronica (Ronnie), 13, spent three years in nine different foster homes, until she finds a family with counselor Alison, who comes to love her and wants to adopt her. But can Ronnie trust anyone? Can she abandon the idea of reuniting with her "real" mom?

Hey I was pretty close with the sent back theme! The cover is lacking something, though. A bleakness that would show in a person's eyes if they had this kind of life. The cover, to me, says "I'm sad because my parents ignore me sometimes...they have a new baby", in terms of sadness impact. And the Saved By the Bell cutesy file doesn't do the dark premise justice. 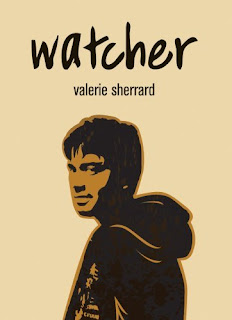 This one is fun because I get NOTHING from the cover. No blurbs or reviews or anything. Just a title, the author and a simple illustration. This boy has "I watch you while you sleep" written all over his face. He's a peeping tom. And a thief. He steals stuff and then hangs around in trees peeping on ladies. Then he'll fall in love with one girl in particular and connect with her in a way he's never experienced before. But he's pretty mischevious looking. He's sly. His looks say "I don't need to peep on the ladies because my natural slyness makes me attractive to them". What would he be watching then? I bet he's about 15 in the book. I'm sticking to the thug theme, though. A thug with a heart of gold.

What Watcher is REALLY about:

Sixteen-year-old Porter Delancy believes he has his future figured out, but his nice, neat plans are shaken when a man he believes may be his father suddenly appears in his Toronto neighbourhood. Porter knows he wants nothing to do with the deadbeat dad who abandoned him and his sister 12 years earlier, but curiosity causes him to re-examine the past. Unfortunately, actual memories are scarce and confusing, and much of what he knows is based on things his mother has told him. As Porter looks for answers, it begins to seem that all he's ever going to find are more questions.

Huh. The author, from her website, goes on to say that, "Parental Alienation is a form of abuse involving the destruction of a child's relationship with one parent, by the other. It is, for the most part, an unpunished crime." So the title comes from his re-evaluation of his past? I don't know why he's smirking on the cover. The real premise sounds pretty cool, though. And I didn't notice it's by a Canadian author.

This is probably one of my only blog posts where I hope the authors aren't googling themselves. Yikes. :)

Mandy
Posted by Words Worth Blogs! at 3:48 PM

That first book sounds totally awesome... I'll have to check it out a little more.

I'm wondering about the theme you had to these two "random" pulls; it's as if your book store had a YA display of child abuse books. Which I don't think is actually likely, but it's kind of funny (not ha ha, per se) that you picked two books that are both about neglected children.

Mandy, Watcher is pretty good. The title comes from the fact that he thinks this guy in his neighbourhood is watching him, and he figures it must be his dad trying to reconnect.
Clare

Clare: Oh yeah, just checking Watcher out made me put it on my to be read list for the near future. It really does look good. Especially after your additional remarks about being watched and thinking it's his dad. Fascinating. Thanks.

Lit Crazy: Ha, I know! We don't actually categorize like that. The way I grabbed them was, "hey I like the title or colour on the spine, what's this all about". I am a reading grazer. I'm pretty much open to reading anything so things just find me. This happened to be an off-chance regarding the similar themes! Both books look really good.
Our YA and Teen sections are just alphabetical by author's last name. All the more fun for grazing!

That was a fun game.

With covers that really grab me, I usually find the real stories are never as interesting as the ones I made up from the cover. Which is useful in it's own way, as then I'm free to write that story myself :)

I think that's how I pick out a lot of book when I am browsing book stores or the library. I like this feature! Very fun.

Haha I loved this post! I shoukd try it sometime :P
You wasn't too far off with the first one!